Amsterdam has been on my travel bucket list for as long as I can remember. Since moving to London in the fall of 2016, I could practically hear the fairytale windmills, gorgeous tulips, colourful houses, glittering canals, and delicious stroop waffles calling my name. So of course, I was psyched when Chris said we could go to Amsterdam in early May!

We left London on the first Saturday of the month, excited to be spending the early May bank holiday in Amsterdam, where the weather was forecast to be incredible all weekend!

When we arrived at our hotel, QO Amsterdam, I was floored. It was gorgeous. Everything was brand new, the whole room was automated (controlled by the iPad next to the bed), and it was incredibly eco-friendly (they even grow their own vegetables and herbs on the roof!). Apparently Chris booked this hotel before it was even open, so we got a crazy good deal on a room with his IHG points. Win!

After an early check in to drop off our bags, we headed out for some lunch, deciding on a nearby spot called Riva on the Amstel River. The food was tasty and it was nice to sit out in the sun, watching the locals cruise by in their river boats.

Next, we took a train into the centre of the city. We had booked a free walking tour with FreeDam Tours. Our guide was extremely friendly, fun, and knowledgeable… and she even brought stroop waffles along for us! 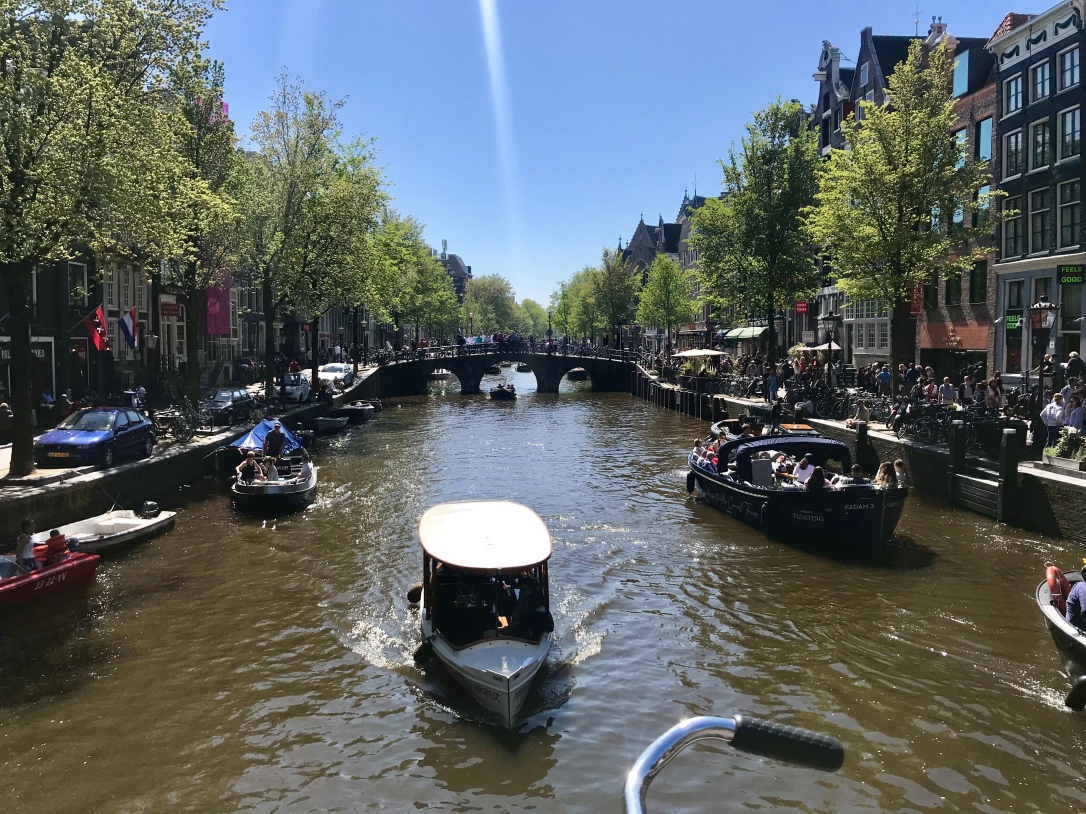 Later, before heading back to our hotel, we stopped along the Amstel riverbank to enjoy the sun and pleasant weather with the locals. (Some people were even grilling!) 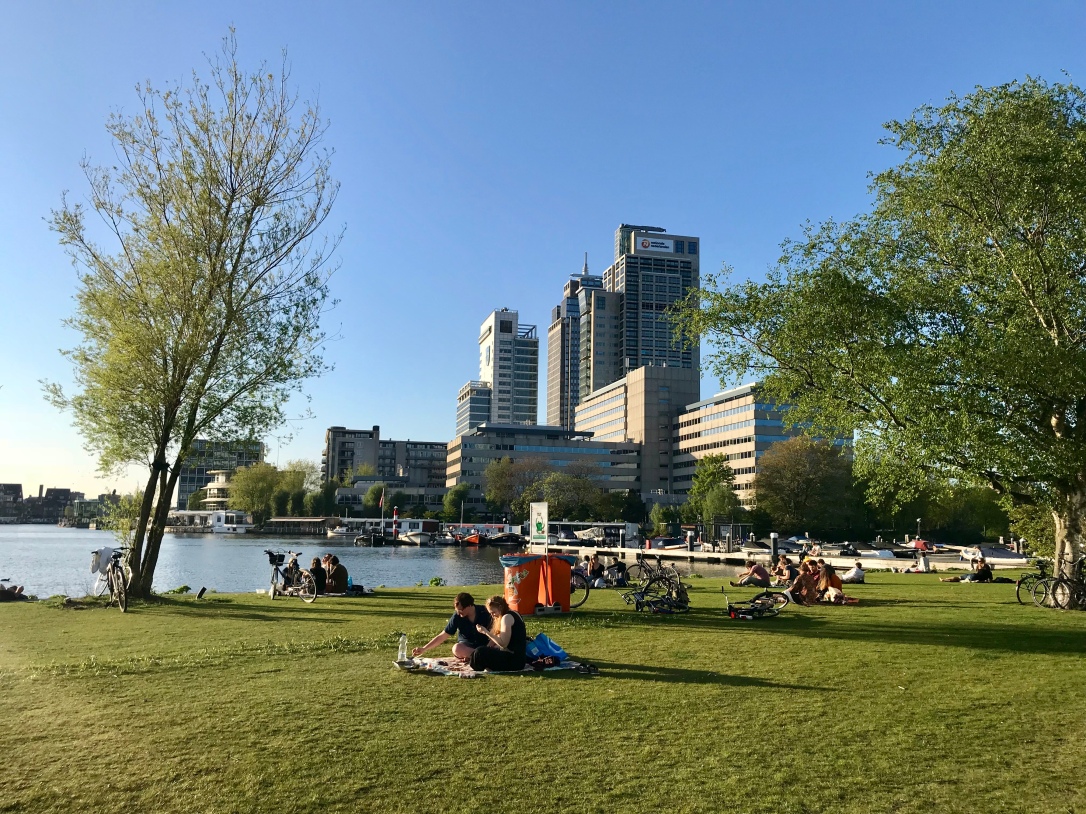 The next day, after walking through the streets of a neighbourhood called De Pijp and having an amaaaazing breakfast at an old converted cinema called Coffee & Coconuts, we explored the canals and streets of Amsterdam-Centrum.

Next, on the recommendation of a friend, we took a canal cruise with Friendship Amsterdam. It was so fun! We were served cold drinks (a treat, because it was starting to get really hot out!) and our captain was knowledgeable and friendly, sharing interesting facts and stories about Amsterdam. He even took a cup of water from the canals and drank from it to demonstrate how clean the water is!

Chris asked our captain how many bikes get stolen in Amsterdam each year and our captain said people get their bikes stolen about every 16 months… which is why most people don’t go out and buy expensive bikes! Many of the bikes also end up in the canals! 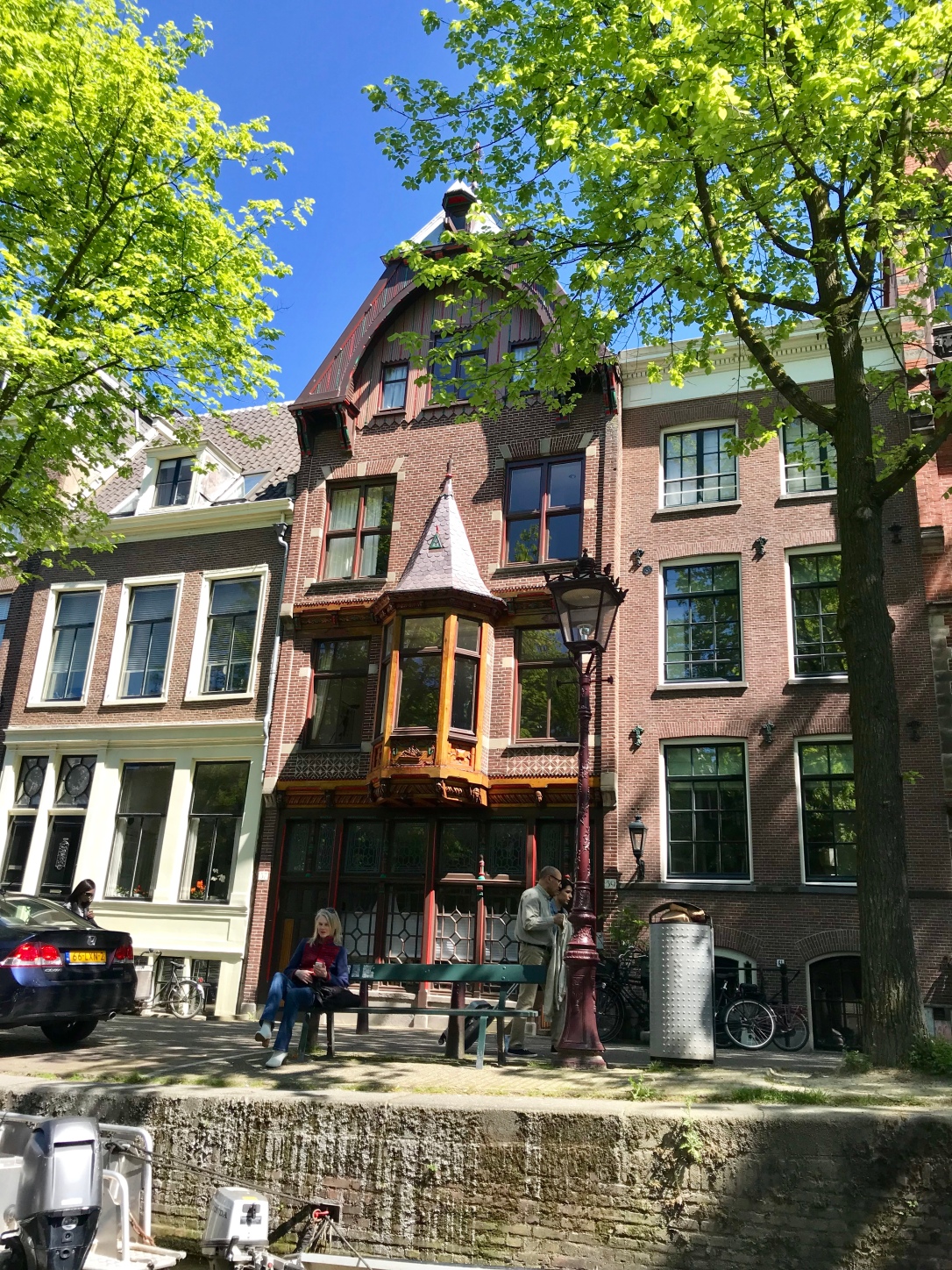 After the boat ride, we continued to explore the streets and canals of this incredible city, stopping for a stroop waffle and gelato cool-down at a place called Metropolitan. Yum!

Eventually, we ended up at a trendy waterfront bar/restaurant called Waterkant. We were planning on just staying for a quick drink, but it had such a cool vibe that we stayed for a while! Apparently, it was the place to be!

That night, after a brief rest back at our hotel, we headed back into the centre of the city. As tired as we were from exploring and walking all day, we had to check out the famous Red Light District!

Chris was nervous. He had heard that the area was sketchy and dangerous and warned me not to bring anything with me, so I took only my phone and ID as we headed out the door. When he realised, halfway there, that I was wearing my wedding ring, he got even more nervous and told me to turn it around!

Little did we know, there really wasn’t any need to worry. When we got to the Red Light District, there were groups of giggling couples (young and really old!), guide-led tours, and more curious travellers wandering around! Everyone was happily meandering and checking out the sights.

(If you’re curious about the Red Light District, you can read more about it here. It has a really interesting history!) 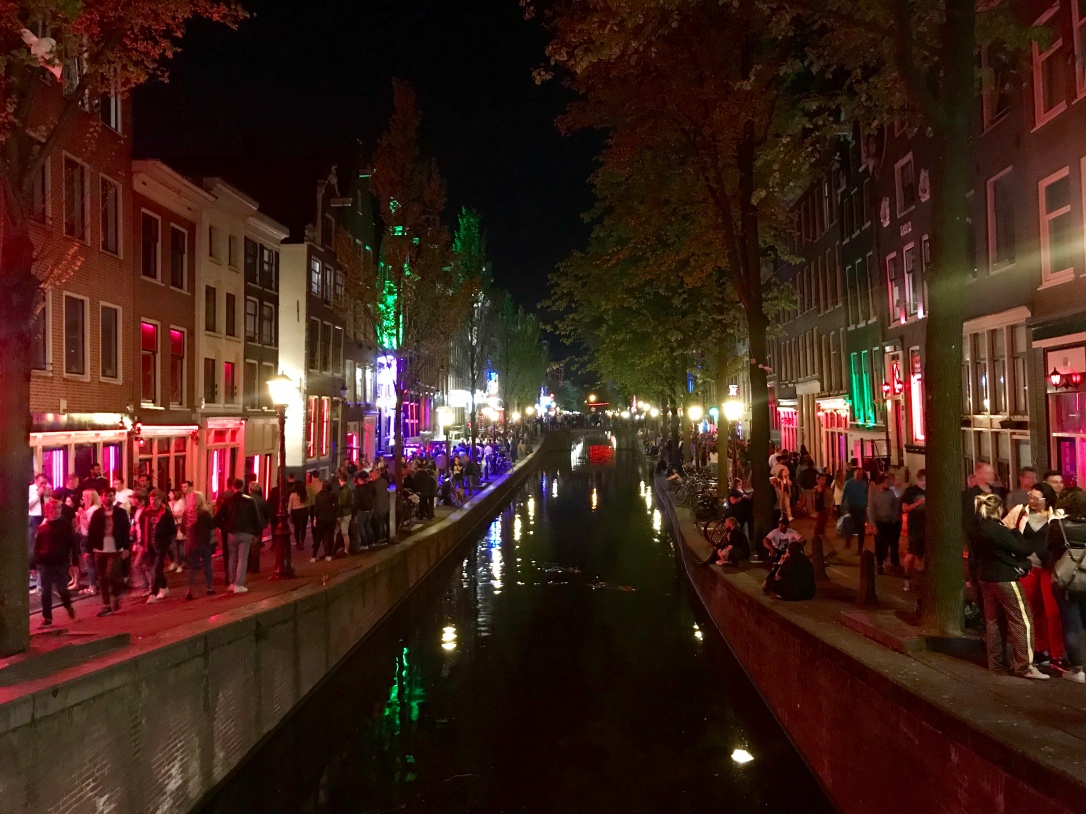 On our final day in Amsterdam, Chris and I took a bus to the Keukenhof flower gardens, allegedly the largest tulip garden in the world, with over 7 million flowers! It was incredible!

So, without further ado, the rest of this post is dedicated to all the incredible blooms we saw in the Keukenhof gardens. Enjoy! ❤ 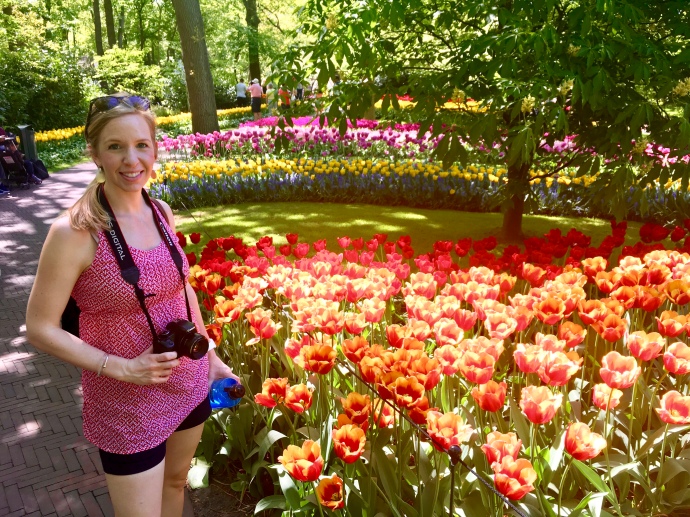 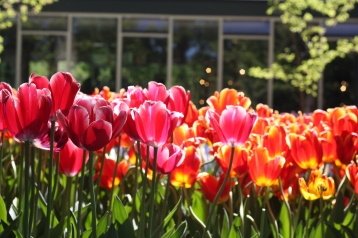 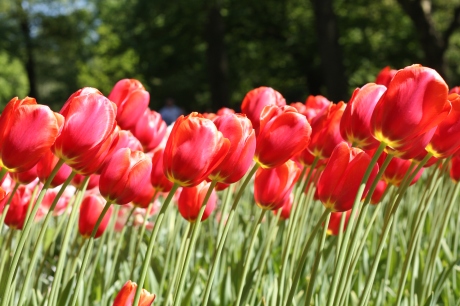 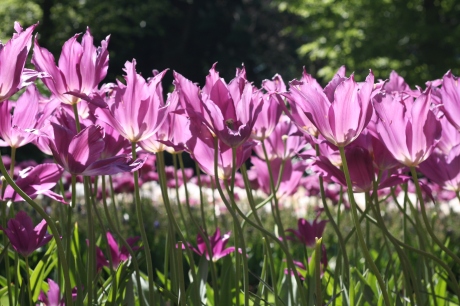 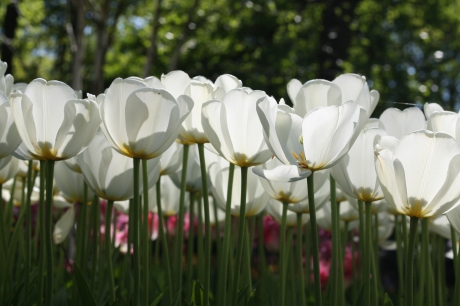 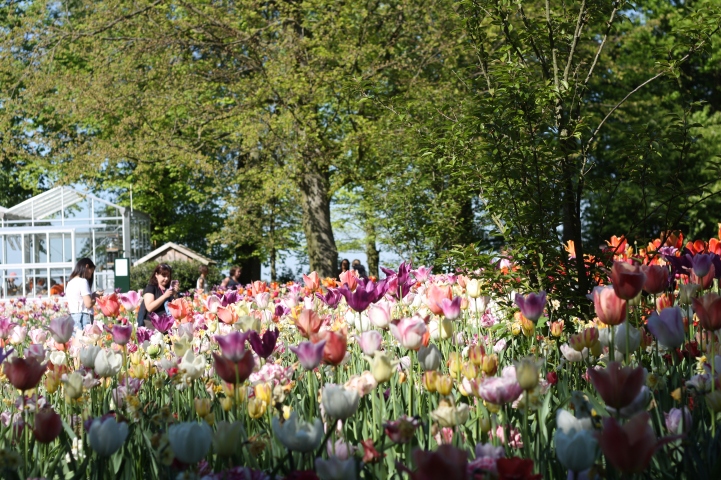 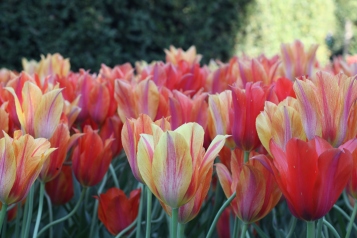 2 thoughts on “Fun in the Sun in Amsterdam”