I did not used to be a light packer.

I’d go away for a weekend and pack 7 pairs of shoes. (In hindsight… Seriously, Molly??) When I started going on bigger trips with Chris, I quickly learned that if I wanted to be able to physically carry my bag and not be annoyed at my own over-packing later, I’d need to take a closer look at my packing habits and learn how to plan ahead… like an adult.

Which is why it felt so darned liberating to arrive in the Scottish capital of Edinburgh with just a small backpack and purse between the two of us. Never before had I left my home to travel TO ANOTHER COUNTRY and packed less than a full closet’s worth of clothing and shoes. This was the first trip we’d taken after we moved to London, and was the trip that made me realize how incredible our lives were going to be for the next couple of years. We had just taken a 4 hour train ride to another country to hang out for 2 days… just because we could.

That Saturday morning in October, we took an early train from London to Edinburgh. We were surprised to find groups of guys with packs of beer – half in the bag at 9 am – causing a raucous. They disembarked at Newcastle and we put two and two together, realizing that they had been “tailgating” for a football match! (After that, the ride was much calmer!)

We arrived in Edinburgh around noon, our growling stomachs demanding sustenance, so we stopped for some lunch and a coffee at Southern Cross Cafe. The cafe was adorable, everything was delicious, and the staff was incredibly friendly. It felt like a very warm welcome to the city!

Since we barely had any baggage (and couldn’t check into our hotel yet anyway), we explored the Old Town for a bit. We walked down the Royal Mile and window shopped, trying to imagine the looks on our friends’ faces if we came home in kilts. 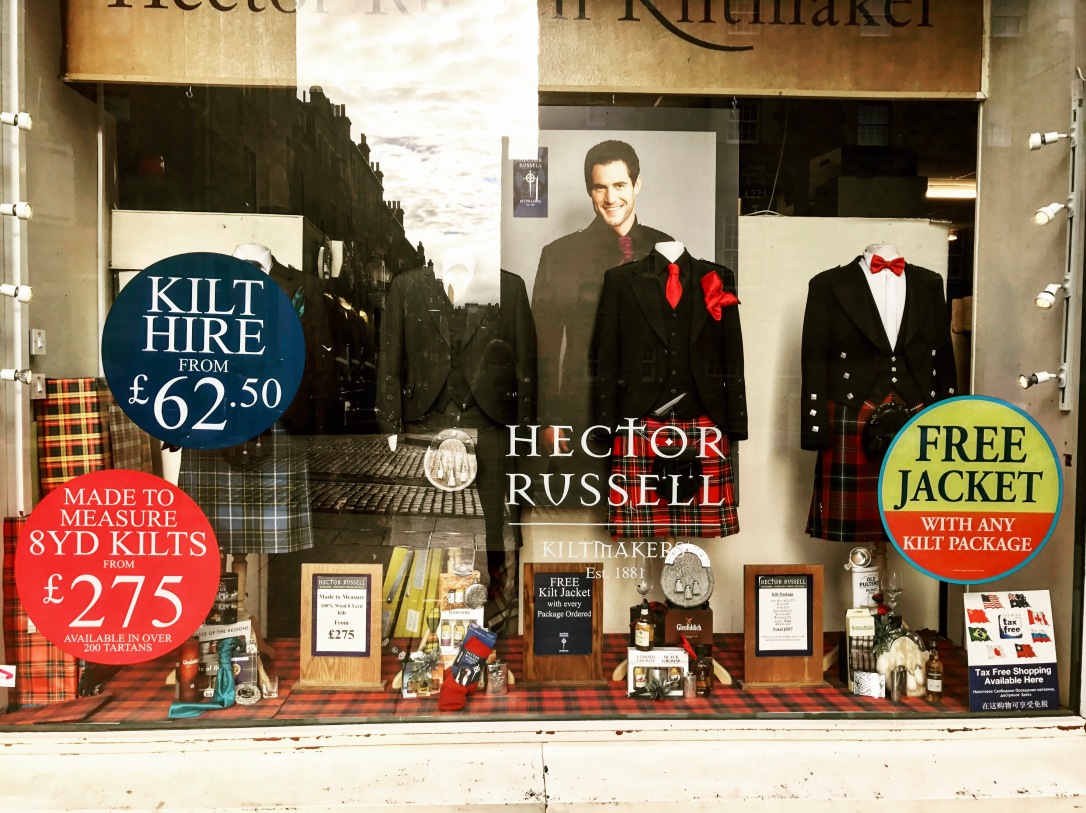 We wandered back up the street and marveled at the architecture of the buildings and St. Giles’ Cathedral. We noticed that a lot of the buildings were blackened from years of smoke, soot, and pollution, but it all still looked so beautiful! 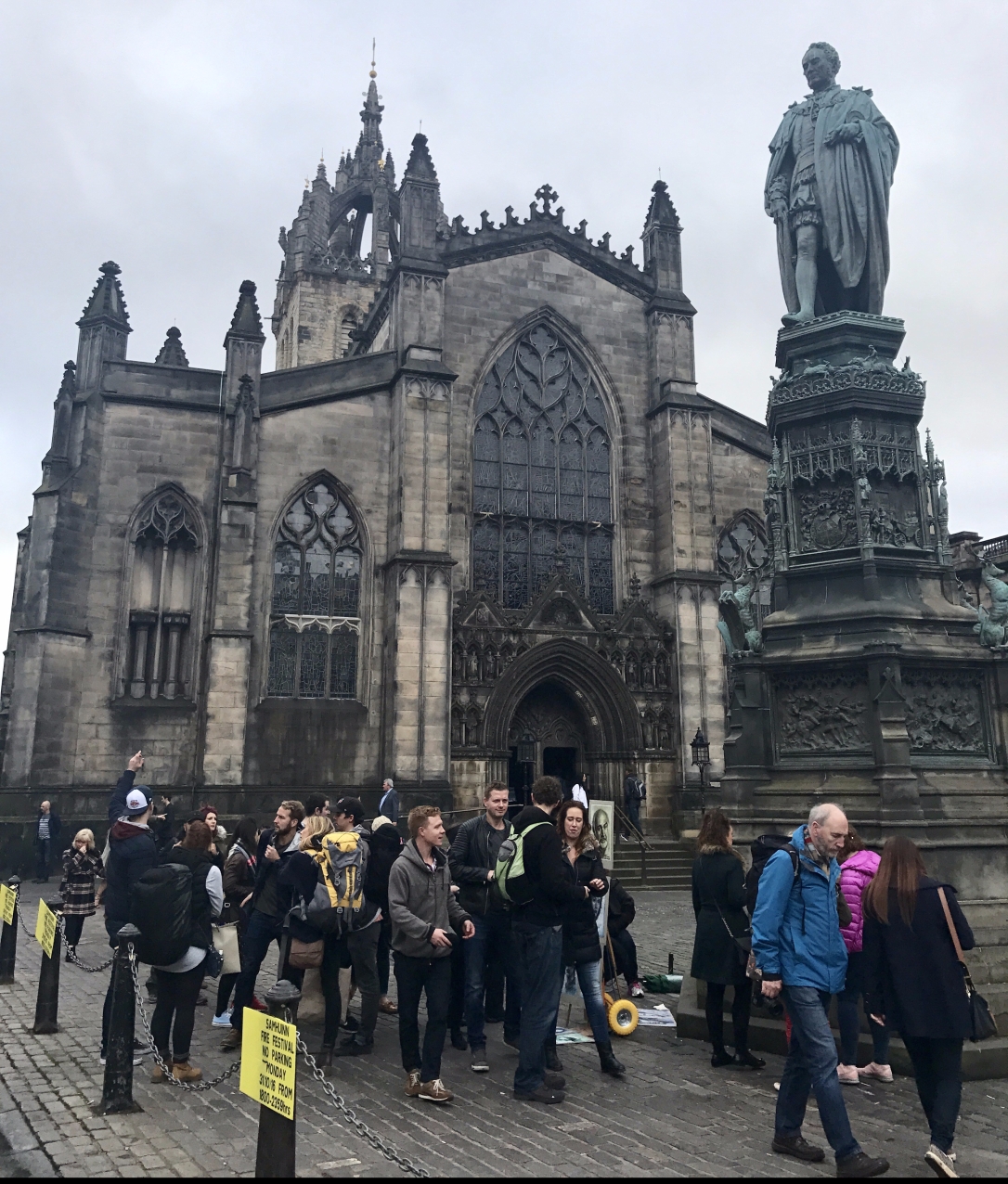 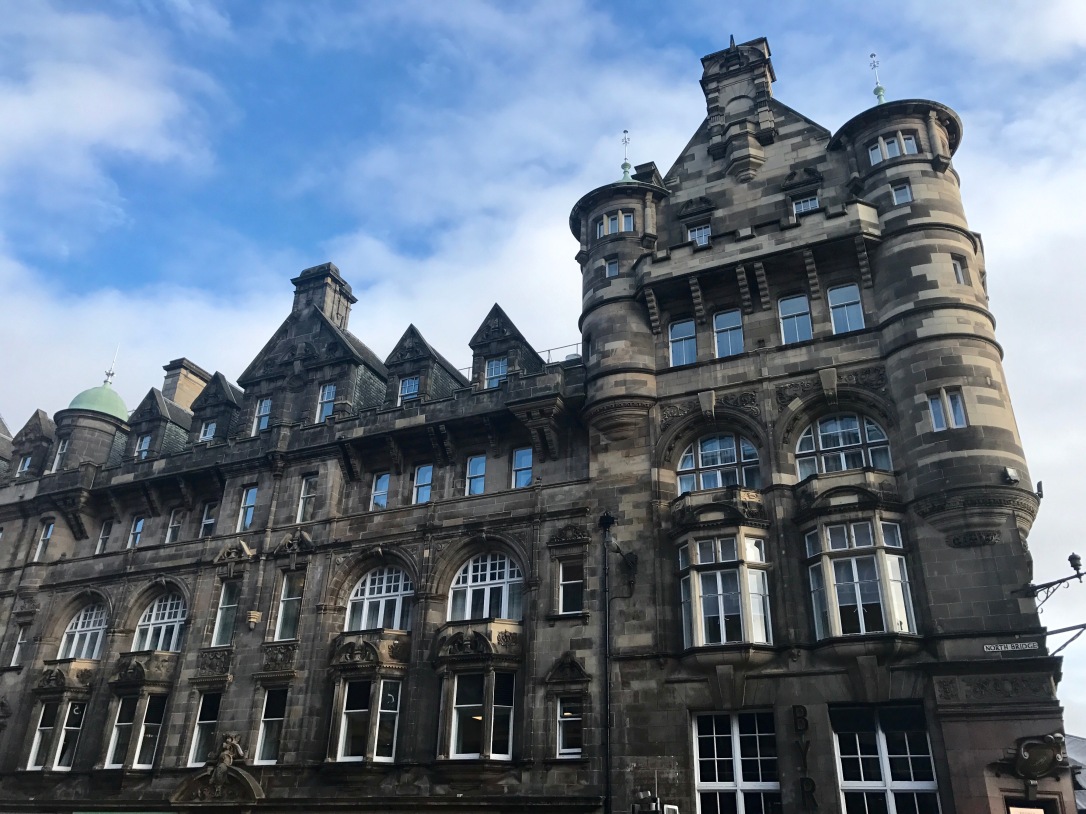 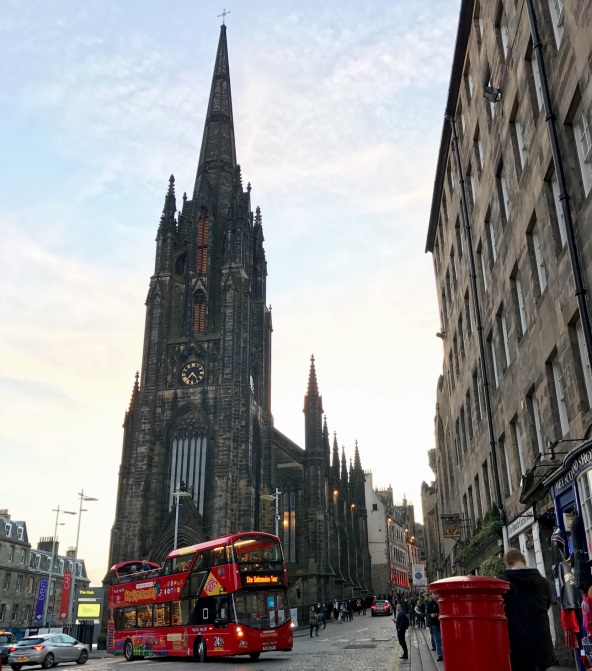 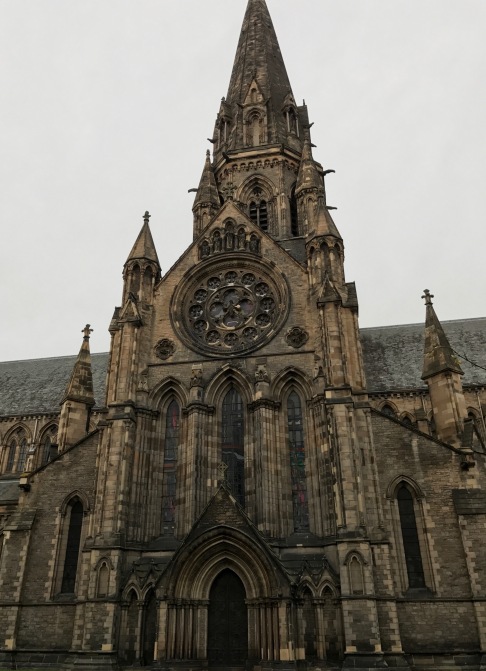 We continued up the street until we got to Edinburgh Castle. It was pretty impressive. We didn’t go in, and now I regret it. (All the more reason to go back??) From outside the castle, there was a great view of Arthur’s Seat, a nearby hill with great views of the city… but more on that later!

We finally made our way to the hotel, checked in, rested, and re-caffeinated before heading back out for the night… We had plans. Big plans. Big plans that involved finding whisky. (For Chris, that is. I have a policy for myself where I don’t drink anything that smells like it’s going to catch my face on fire when I lean in to take a whiff.)

We got some dinner somewhere, then set out on our search for whisky and other beverages. We stopped at The Devil’s Advocate, The VooDoo Rooms, and The Royal Oak (a tiny local pub with live music, but a little too crowded for us!) to start.

Glad to see the Scots have their priorities straight. 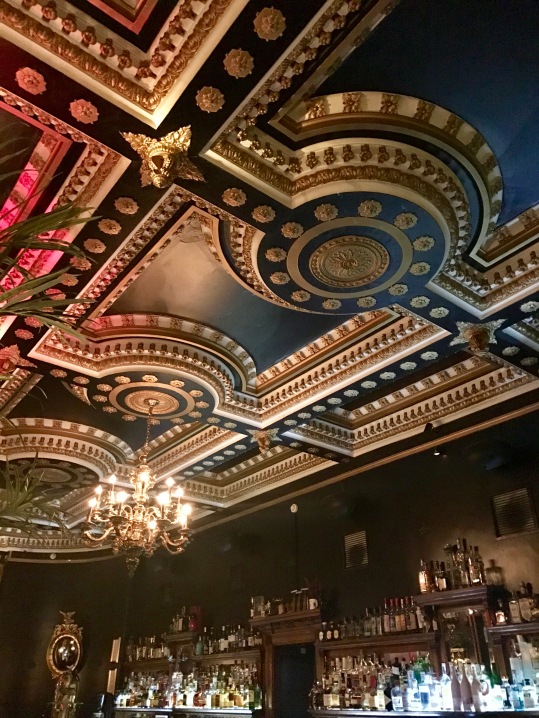 The ceiling in The Voodoo Rooms… very cool decor with a New Orleans feel!

One of the most impressive places we went for a cocktail that night was The Dome. It was so fancy, festive, and full of color inside. They had giant flower arrangements, enormous sparkling chandeliers, and colorful uplighting.  It was a beautiful place… the kind of place where you can only afford one cocktail. Sooooo we moved on pretty quickly. 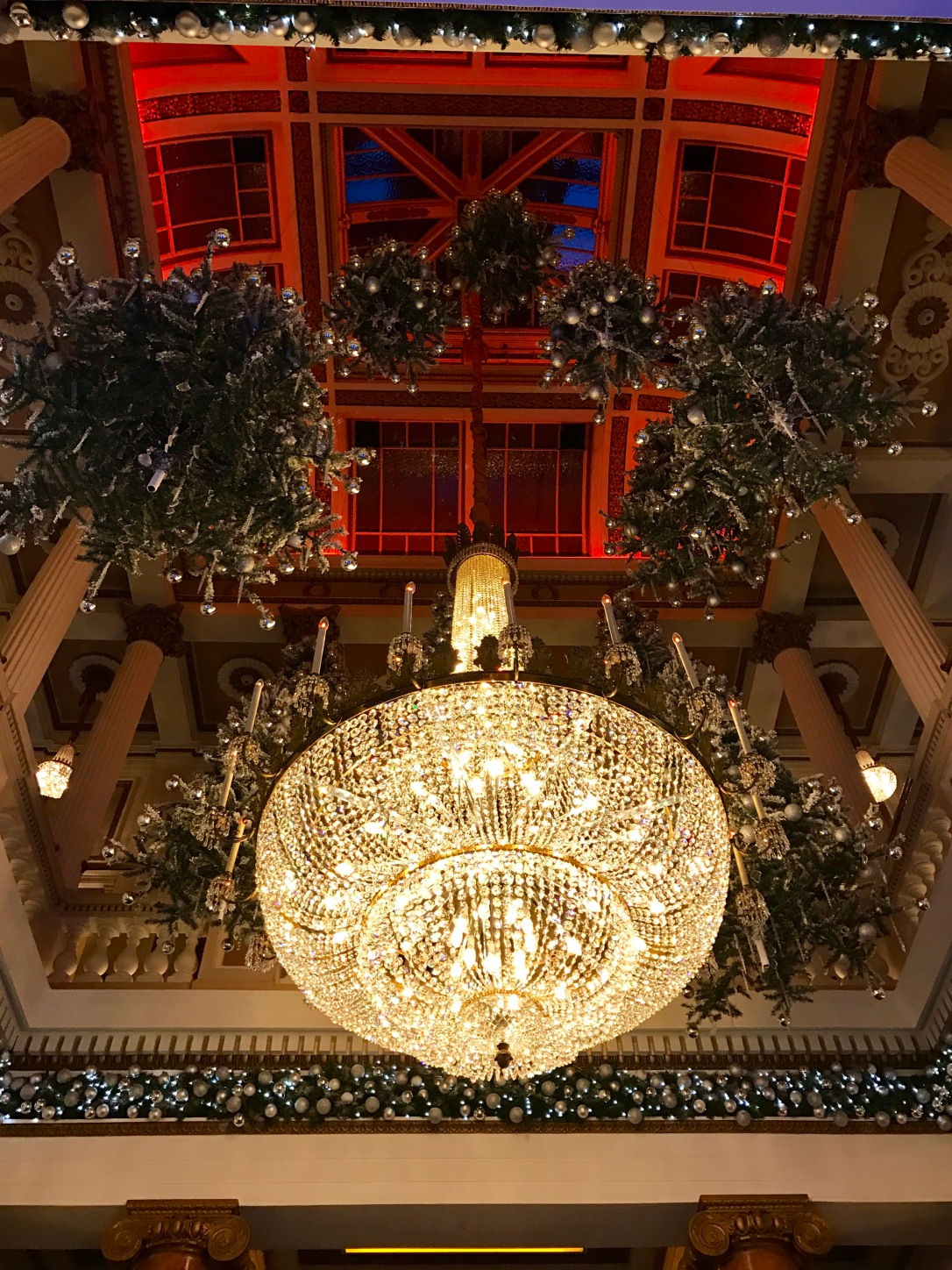 Later in the night, we found ourselves at Cabaret Voltaire, a nightclub. Apparently we got there WAY too early because the only other people we could see on the dance floor through the red lighting and dense smoke from the smoke machine were three dudes, busting some serious moves together. We got a quick drink there, went to a few other pubs and bars, and returned around 1 am, when it started getting a little more populated.

We had made quite the fun little pub crawl for ourselves by the end of the night, made all the more interesting by the fact that it was Halloween weekend and there were DRUNK ZOMBIES EVERYWHERE. It seems as though most people here tend to stick to the traditional idea that Halloween costumes must be scary (whereas in the U.S., a lot of people wear funny costumes). So everyone was a zombie. We saw Zombie Alice in Wonderland, Zombie Little Red Riding Hood, about 20 zombie nurses… Zombies everywhere. When we had had our fill of pubs and zombies, we headed back to the hotel for some beauty rest.

On Sunday morning, we packed up what little we had brought to Edinburgh with us, checked out of our hotel, and grabbed a quick bite to eat on our way to Holyrood Park. We had heard that hiking up the hill to a spot called Arthur’s Seat was a must-do on any trip to Edinburgh and we did not intend to miss out on the fun!

We reached the bottom of the hill and started up the winding paths over the beautiful green landscape. As Chris and I meandered, I couldn’t help but feel like I was in a movie. It was so beautiful! This was my first experience with the Scottish “countryside” (even though we had just stepped out of the city), and I haven’t been to Ireland (YET!!), so I had only ever seen rolling hilly landscapes like this in films! 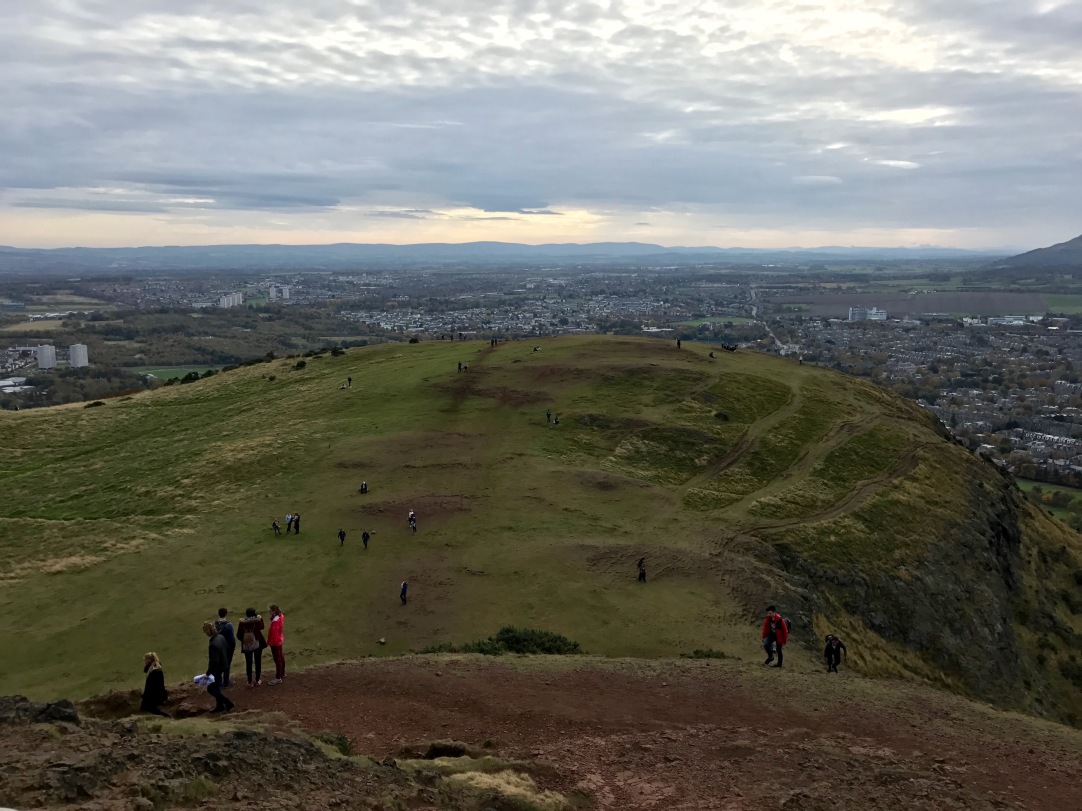 The walk was quick and easy (nothing my trusty Keds couldn’t handle!). When we got toward the top, we saw we weren’t the only ones enjoying a walk that chilly October day! It was pretty crowded on Arthur’s Seat! We sat for a few minutes, enjoying the view of the city, and snapping a few photos before starting our descent. We wanted to get back in time to make the free walking tour that was starting on the Royal Mile!

We power-walked our way back into the city and found the spot where the tour group was meeting. When we realized they offered a tour in Spanish, we split up – Chris joining the English group and me joining the Spanish one (gotta keep up my Spanish somehow!). Obviously I was the only blonde, gringa, and non-native Spanish speaker, so I stuck out like a sore thumb. I realized I was in trouble when the tour guide explained, in rapid Castilian Spanish that she liked to talk, but that she’d try to keep the tour to 3 hours.

…Three and a half COLD hours later, I had learned a little more about Edinburgh, but my brain hurt from trying to keep up with the tour guide’s speedy Spanish. Chris’s tour had ended about an hour earlier, so he had tried to go to The Scotch Whisky Experience for a whisky tour while he waited for me to finish up, but the tours were all booked up so he headed to Whiski Rooms instead. I met him there when I was done and warmed myself up with a hot toddy while he sipped some straight whisky.

Wanting to grab some dinner, but not brave enough to try haggis (a traditional Scottish dish – aka animal stomach mystery meat), we opted to share the “vegetarian haggis” which, in hindsight, was just as sketchy as the regular haggis seemed.

We had a few more hours to kill before heading to the bus station, so we did what we apparently do best when we go to Scotland, and did some more barhopping. We went back to VooDoo Rooms, then grabbed some Scotch at the Barmoral Hotel (which felt like the epitome of a Scottish gentleman’s whisky club with bartenders in kilts). Chris found a speakeasy called Bramble Bar & Lounge (not so secret if you can find it on google, right?), which felt like you were in someone’s awesome basement bedroom. There was literally a bed in it. Chris had his 6th(?) whisky of the day there (when in Rome, right?!), then we made our way to the bus station.

Now… let me tell you about this bus ride… Ha.

We had decided to take the megabusGold sleeper bus back to London. This meant we were leaving close to midnight on Sunday night and would be arriving back in London a little after 8 on Monday morning. The bus looked like a double decker coach bus, with two levels for passengers and storage underneath. There were little bunk areas, separated by an aisle. There were “double” beds and single hammock-style beds… meaning, Chris and I would be laying next to each other with some random person hanging right on top of us. (We later took to calling this bus experience the “rolling hostel” haha.)

At the bus station, we changed into some comfy sleeping clothes before boarding. When we went to get on the bus, there was a man arguing with the bus driver. The passenger (who had already been on the bus, as he was coming from another stop before Edinburgh) was begging the driver to move his seat because the man next to him was snoring so loudly that he couldn’t sleep. The bus driver told him he wouldn’t move his seat and tried to persuade the man that he wouldn’t hear a thing once the bus started moving.

Well, guess where the driver assigned us… UNDER THE SNORE MONSTER. He was SO LOUD!!! We did our best to make do for the first half hour of the ride, but when it quickly became apparent that we would be getting zero sleep, we switched bunks (just hopped up and moved over one). Our new bunk mate, luckily, was not so symphonic, and we were able to get some shut-eye.

We woke up in London around 8, having survived our “floating hostel” experience. We left the bus station, hopped in an Uber, and headed home. It had been a whirlwind weekend in Edinburgh that had made us hungry for more (minimal baggage) adventures.