When Chris’s family came to visit us in London for Christmas this year, we knew at some point, we’d want to take a day trip out of the city. We ended up deciding to go to Stonehenge, and it turned out to be the best day trip we could have done!

Chris bought our train tickets and Stonehenge tickets the day before we went. He bought the tickets that would give us a ride on the tour bus and let us into Stonehenge, Old Sarum, and the Salisbury Cathedral. Now, we have an English Heritage membership, so we get into all of those places for free (as well as hundreds of other sites all over the U.K.!!), and we just need to buy a bus ticket when we go next time!

We started our day by getting up super early and catching the 7:52 am Southwest Train from Clapham Junction to Salisbury. It was a quick and easy ride, and we arrived in Salisbury at around 9:30. We had time for a very quick coffee and bite to eat at The Real Eating Company (yum!) before hopping on the first tour bus at 10:00.

It was a quick ride to Stonehenge from downtown Salisbury. The driver had given us headphones (ear buds) when we got on the bus, so on the way, we learned a little about the history of Stonehenge. Before we knew it, we were there, getting off the bus, grabbing our free audio guides, and walking into the welcome center. We showed our tickets at the counter, had time for a quick run to the loo, then hopped in line for the first shuttle to the rocks at 10:30!

After a two-minute shuttle ride, we arrived at the site and started to walk toward the famous rocks we’d all heard about. We followed the signs along the path circling the stones, and used our audio guides to learn more about the history and mystery of Stonehenge (I set my guide to Spanish again haha!). It was pretty interesting! They had guest historians share stories from Stonehenge’s past, as well as the theories behind the mystery of the site and how and why the stones had come to arrive there. 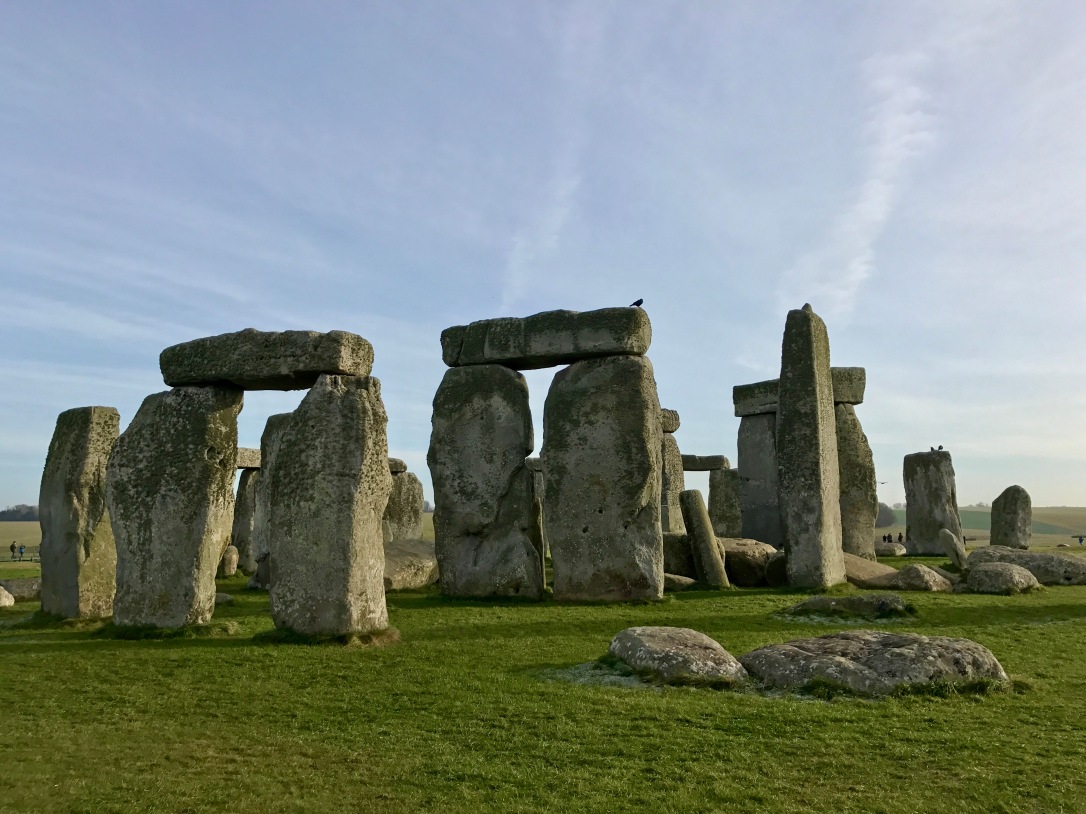 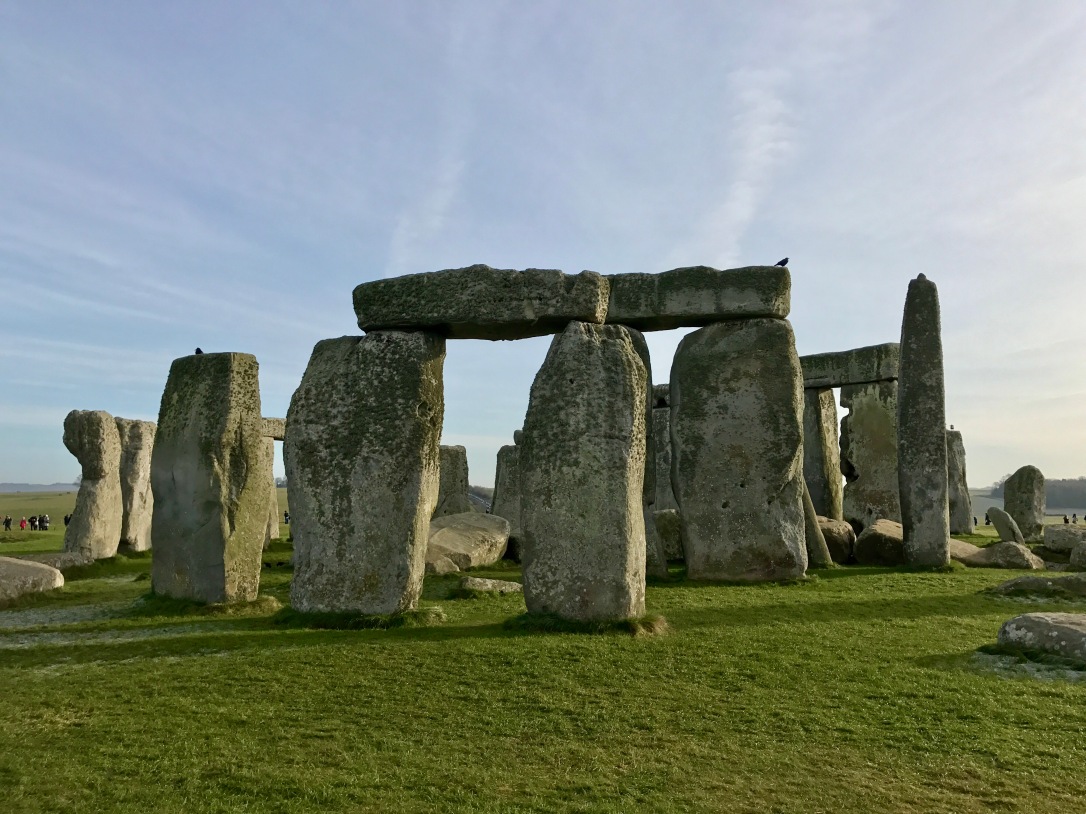 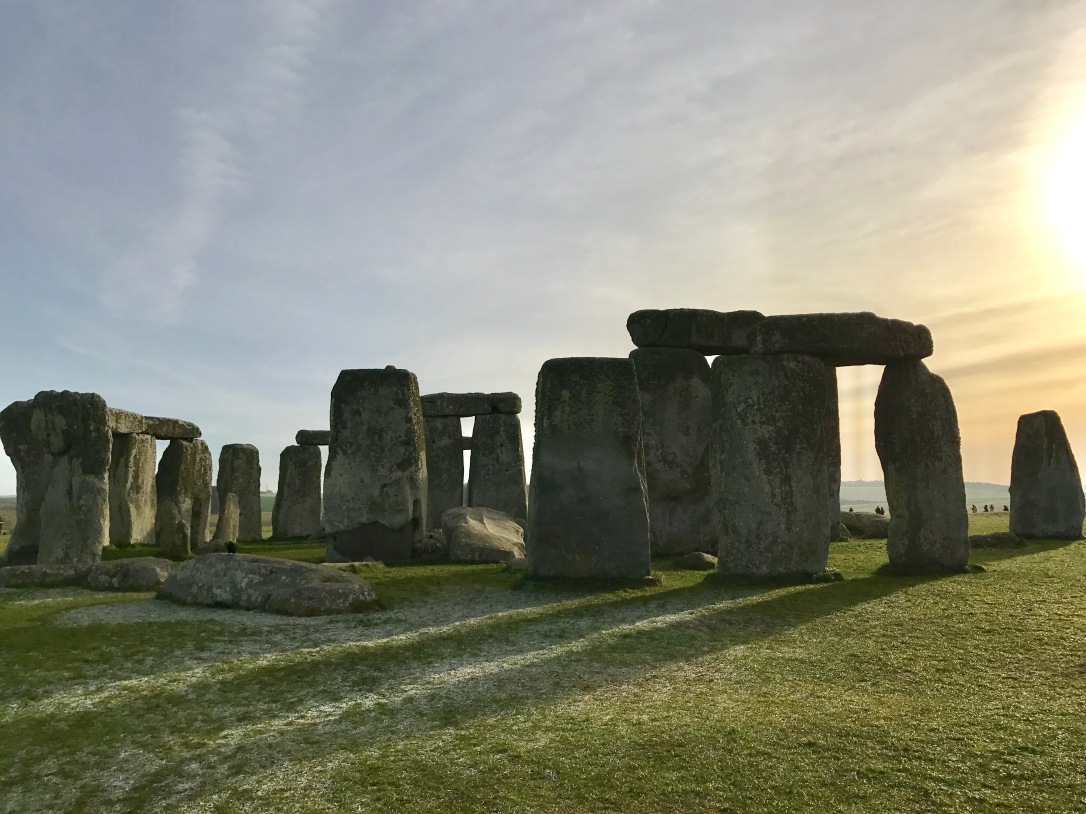 After marveling at the impressive site, learning about the history, and taking countless photos, we finally boarded the shuttle and headed back to the welcome site. (We were glad we had gotten up so early to make the first group, because it was starting to get really packed there!) We took a quick walk around the exhibition and museum to see and learn a little more before boarding the tour bus to head back toward the town.

As it’s a hop-on-hop-off tour bus system, we were able to hop off at the Old Sarum site for a poke around. Old Sarum was the site of an old royal castle and the first cathedral of the area (which was later moved to Salisbury).

On the tour bus, we had learned that Salisbury had escaped a lot of the bombing that other parts of the U.K. suffered during WWII because the cathedral (off in the distance in the photo below) was an important landmark during the war. There was a German Luftwaffe order that it was not to be bombed because pilots would use it to orient themselves.

After about a half hour, we were ready to hop back on the bus and get back into town. The bus dropped us off downtown and we made our way over to the Salisbury Cathedral. (There wasn’t a fee to enter, but they were asking for donations to help with the expensive upkeep.) We walked around the cathedral, admiring the beautiful interior and exterior, before heading to the Magna Carta exhibit. Apparently, there are only four remaining original copies of this important historical document in the world, and one of them is housed here, so it was pretty cool to see (sorry, we weren’t allowed to take photos of it!). (Here’s a quick history lesson for those of you who don’t remember what the Magna Carta is… I know I didn’t!) 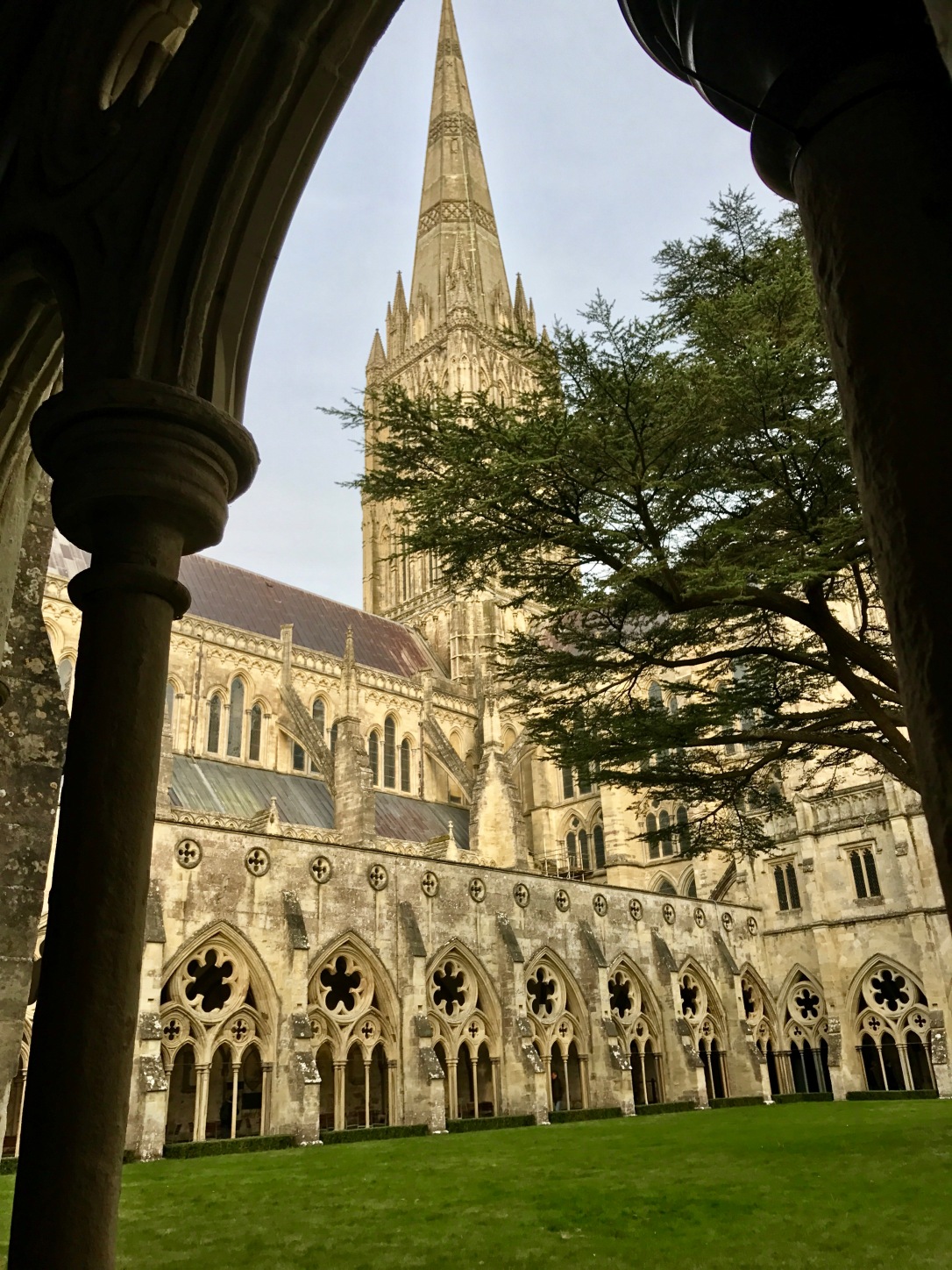 Our bellies started rumbling, so we headed to The Haunch of Venison for an early dinner. (I had the aaaaamazing slow cooked New Forest venison and red wine casserole. YUM.) Then, with our bellies full, and our tired feet ready for a break, we headed to the train station to catch the train back to London. It had been an action-packed day trip, indeed!

Dream big, little boy ❤️
I’ve been this sweet little boy’s Mummy for 16 months now. 💛
Had a lovely stay at Dumbleton Hall Hotel out in the Cotswolds this weekend. Glenn enjoyed climbing all the stairs, smelling all the daffodils, and playing “find all the beer coasters.”
Road trip out to the Cotswolds this weekend... Took a small detour after a pub lunch to check out Jeremy Clarkson’s new Diddly Squat Farm Shop. 🚙 🇬🇧 🗺 #navigatingnewlyweds
Love exploring with my little buddy. ❤️
Loved checking out the Setas de Sevilla at sunset yesterday! (And Glenn loved the playground. 😊) 🇪🇸
Today, we took a day trip from Sevilla to Córdoba, another nearby city I visited while studying abroad in Spain during college. The Mezquita de Córdoba was just as beautiful and impressive as I remembered. ❤️
One of my favorite parts of exploring Sevilla today was soaking in the golden scenes at #PlazadeEspaña before sunset. The cherry on top was the incredibly talented and passionate flamenco performance. 💃🏼🇪🇸 ❤️
Reflecting on my travels in Spain while looking at this reflection in Spain. 🙃🇪🇸🌍
Back in 2009, I studied in Granada, Spain for a semester. During my time abroad, one of my fondest memories was of a group trip to Sevilla, Spain. Living in London now has made it possible to pop down to Spain a few more times and I’ve absolutely loved having the chance to share my love of Spain’s beautiful language, culture, architecture, and way of life with Chris and now with Glenn. 🇪🇸 🌍 #navigatingnewlyweds #littleexplorer
Fun morning at this cute little baby café with my little buddy! 😋🧸💚
Perfect day for a “pub walk”... Did a (muddy) 5 mile walk in the woods and made some friends along the way before getting Sunday lunch at a lovely pub.🦙#navigatingnewlyweds 🇬🇧
Trains and planes and automobiles. Traveling is fun when you’ve got these two by your side. (First photo taken in the family car of the train from Budapest to Vienna right after Christmas.) 🚂 ✈️ 🚘 💙
I loved seeing the beautiful #MatthiasChurch next to the #FishermansBastion. The tile roof was so ornate! #Budapest has some pretty impressive architecture! 🇭🇺
Even though it was a bit crowded and @chris911sc said, “it’s not actually that old,” #fishermansbastion was probably my favourite thing about #Budapest. I loved the design of this lookout and the beautiful views of the city that it provided. Thanks for showing us this gem, @inshredible! 🇭🇺
%d bloggers like this: