On the first full day of our “holiday” (as the Brits say) in Switzerland, it was cold and rainy. We decided to save the skiing for the next day and take a little road trip in our rental car instead. We drove from Engelberg to Lucerne, a nearby city that we had heard was pretty.

It was a nice drive to Lucerne. I think my favorite part about Switzerland was seeing all the beautiful old Swiss chalets as we drove along. They just looked so cozy and snug tucked into the sides of the green, rolling hills, with the enormous, snowy mountains towering behind them. I felt like we were in the movie Heidi!!

When we got to Lucerne, we found a cafe where we planned on grabbing a cup of coffee and a quick breakfast. After spending about 10 minutes trying to read the German parking meter signs and find an ATM, we gave up and decided we’d just keep an eye on the car while we ran into the cafe. While we ate, we planned out which parts of the city we wanted to see. We found a parking garage near the old part of the city and headed there next.

We parked the car and walked over the pedestrian bridge to the old part of the city. There were cute little shops and restaurants everywhere, but we quickly realized we could hardly afford anything there. The Swiss Franc is much stronger than the US dollar right now, so we’d have to pay about $35 for a hamburger. (…I am ashamed to admit that we did buy a hamburger later… but from the McDonald’s value menu…)

We walked around the city for a bit, exploring the area and stopping to look at the unique architecture and the old wooden bridges. We made a quick stop at the Lion Monument we had heard about from some friends. It was pretty impressive! 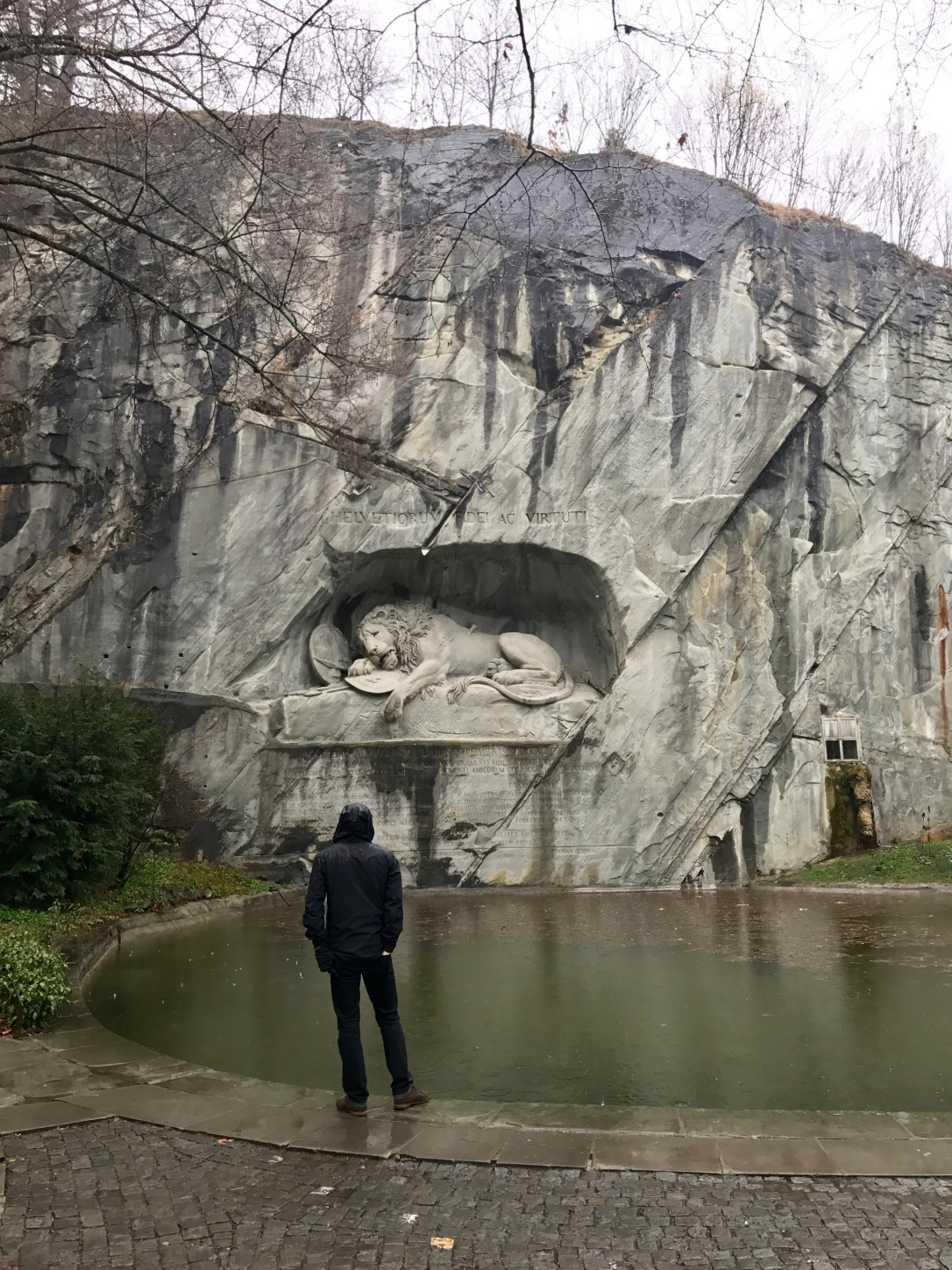 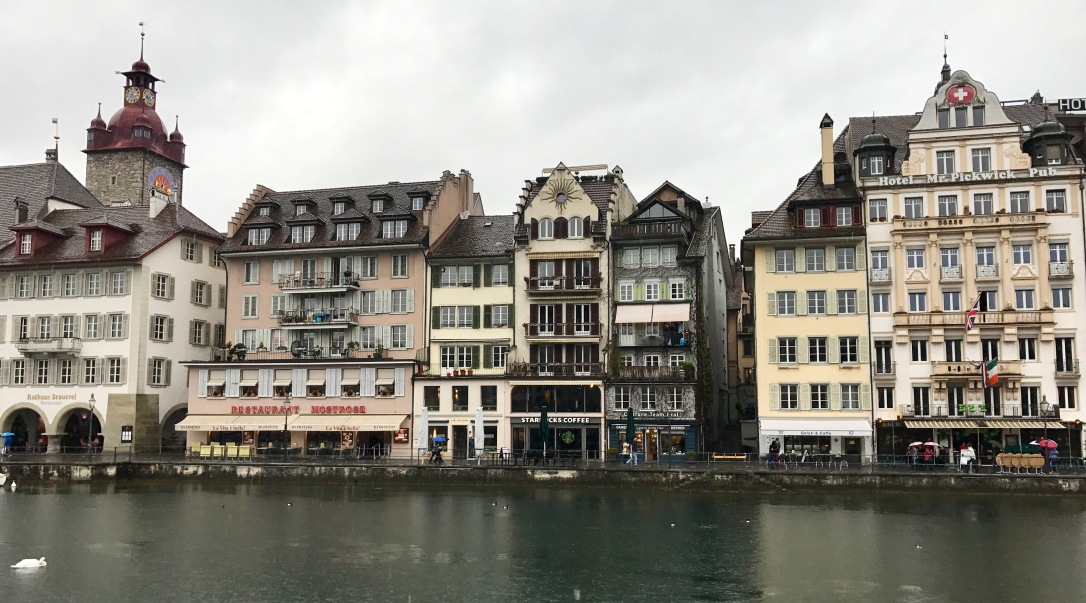 Eventually, we figured we should get back on the road. We decided to drive through Interlaken on our way back to Engelberg! It was an easy and pretty hour-long drive. We drove through mountains along the way and stopped at one point to look out over a town called Lungern that was situated at one end of a glacial lake.

The name Interlaken, means “between lakes,” so we drove along Lake Brienze along the way to the town. Unfortunately, due to the rain and clouds, we couldn’t see what should’ve been a beautiful view!

We arrived in Interlaken and looked around as we drove through the town. It was still rainy and cold and we wanted to be back in Engelberg for dinner, so we didn’t actually stop anywhere. It was nice to drive through though! Exhausted after a late night, an early morning, and a day full of exploring Switzerland, I nodded off to sleep as Chris drove us back to our AirBnB. (Thanks for driving, Chris!!)

P.s. You can read all about our Ski Trip to Engelberg, Switzerland here!

1 thought on “Day Trip to Lucerne and Interlaken, Switzerland”

Dream big, little boy ❤️
I’ve been this sweet little boy’s Mummy for 16 months now. 💛
Had a lovely stay at Dumbleton Hall Hotel out in the Cotswolds this weekend. Glenn enjoyed climbing all the stairs, smelling all the daffodils, and playing “find all the beer coasters.”
Road trip out to the Cotswolds this weekend... Took a small detour after a pub lunch to check out Jeremy Clarkson’s new Diddly Squat Farm Shop. 🚙 🇬🇧 🗺 #navigatingnewlyweds
Love exploring with my little buddy. ❤️
Loved checking out the Setas de Sevilla at sunset yesterday! (And Glenn loved the playground. 😊) 🇪🇸
Today, we took a day trip from Sevilla to Córdoba, another nearby city I visited while studying abroad in Spain during college. The Mezquita de Córdoba was just as beautiful and impressive as I remembered. ❤️
One of my favorite parts of exploring Sevilla today was soaking in the golden scenes at #PlazadeEspaña before sunset. The cherry on top was the incredibly talented and passionate flamenco performance. 💃🏼🇪🇸 ❤️
Reflecting on my travels in Spain while looking at this reflection in Spain. 🙃🇪🇸🌍
Back in 2009, I studied in Granada, Spain for a semester. During my time abroad, one of my fondest memories was of a group trip to Sevilla, Spain. Living in London now has made it possible to pop down to Spain a few more times and I’ve absolutely loved having the chance to share my love of Spain’s beautiful language, culture, architecture, and way of life with Chris and now with Glenn. 🇪🇸 🌍 #navigatingnewlyweds #littleexplorer
Fun morning at this cute little baby café with my little buddy! 😋🧸💚
Perfect day for a “pub walk”... Did a (muddy) 5 mile walk in the woods and made some friends along the way before getting Sunday lunch at a lovely pub.🦙#navigatingnewlyweds 🇬🇧
Trains and planes and automobiles. Traveling is fun when you’ve got these two by your side. (First photo taken in the family car of the train from Budapest to Vienna right after Christmas.) 🚂 ✈️ 🚘 💙
I loved seeing the beautiful #MatthiasChurch next to the #FishermansBastion. The tile roof was so ornate! #Budapest has some pretty impressive architecture! 🇭🇺
Even though it was a bit crowded and @chris911sc said, “it’s not actually that old,” #fishermansbastion was probably my favourite thing about #Budapest. I loved the design of this lookout and the beautiful views of the city that it provided. Thanks for showing us this gem, @inshredible! 🇭🇺
%d bloggers like this: