This is a bit of a late post, but I’m just getting the hang of this whole blogging thing, so bear with me…

Back in March, Chris and I went to Engelberg, Switzerland for a quick ski getaway. (We were getting a little jealous of our friends back at home who were getting feet of snow every week this winter!) On Friday, I worked until 2:30 pm, then took the tube to Heathrow Airport, went through security in about 2 seconds, and was at the spot where I’d meet Chris with time to spare. We had an easy flight to Zurich, then picked up our rental car, and headed to our AirBnB in Engelberg. (I used to get a little nervous about traveling, but man, this is starting to feel pretty natural!)

When we arrived at around 9 pm, we dropped off our bags and went out to go find a St. Patty’s day drink somewhere. The town seemed pretty empty, so we thought it would be a low key night and that we’d just get a drink then head back. We went to the bar at Ski Lodge Engelberg, but then decided we’d also check out The Core (Engelberg’s Irish pub)… Well – we found all the people! Apparently everyone else had the idea to celebrate Se. Patty’s Day at the Irish pub, because the place was packed!

We ended up snagging a table by the window, close to the band that was playing but away from bumping elbows and overly-inebriated vacationers. We were sitting there, sipping our pints, when a guy came over, said “Hallo!” and asked if he and a couple of his friends could join our table, as we had a few extra seats. We said sure, and moved over to make room. Turns out it was a group of 7 Swiss bankers on a team building weekend away, and we somehow ended up right in the middle of their group! We hung out and chatted with them for quite a while.

When we woke up on Saturday morning, it was warm and rainy, so rather than skiing, we decided to go go on a little road trip to Lucerne (a nearby city). You can read all about that day trip here!

On Sunday morning, we had a quick bite to eat, left the AirBnB, and walked the 10 minutes to the gondola that would take us up Mount Titlis for what we were hoping would be a great day of skiing!

Once we took the gondola up, however, it only took one run on the slope to decide the snow and visibility weren’t very good, making it difficult and unpleasant to ski. We killed some time (waiting for the snow to get better with the weather!) by heading into the bar/restaurant for a cup of coffee. 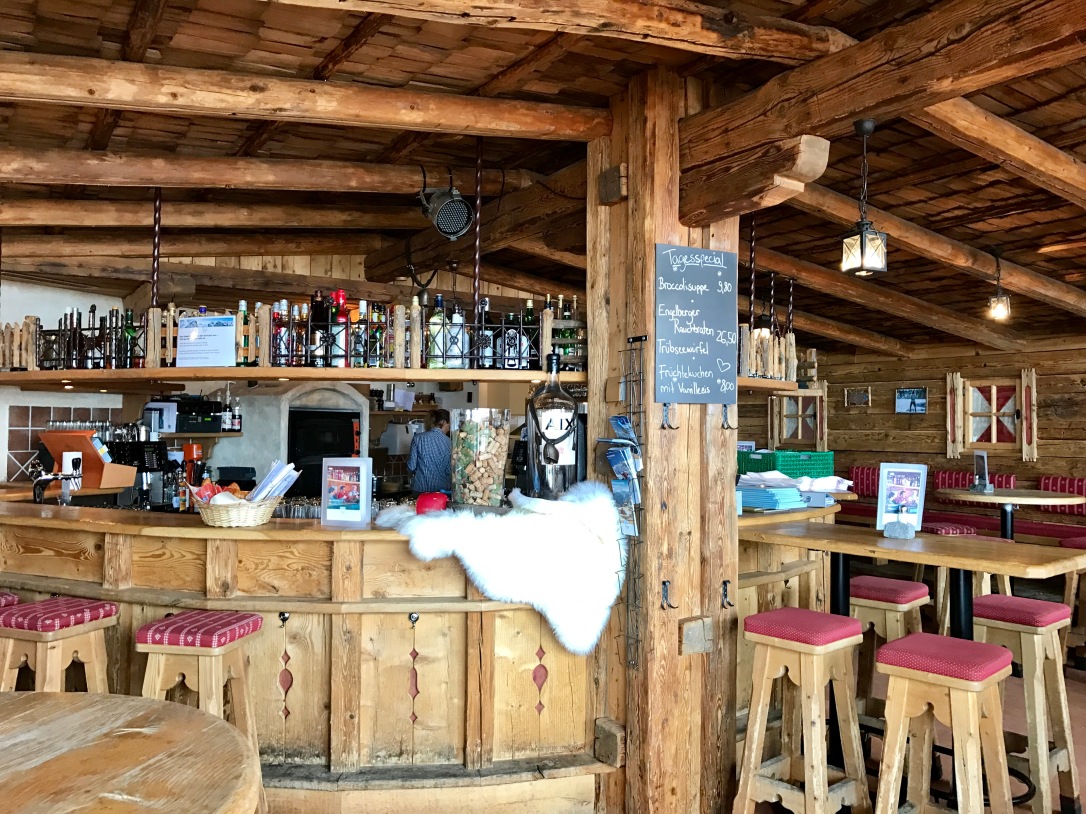 We took a few more runs throughout the day before deciding to call it quits and head back to town. We wanted to get to the grocery store before it closed, so we could make a reasonably-priced meal. (Switzerland is EXPENSIVE!)

By the time we got back with our groceries, the sky had cleared a bit, making for some pretty incredible Swiss scenery!!

Now, you might be asking yourself, “Where’s the snow?!” Well, it had been somewhat of a warm season in the Alps, but more importantly, Engelberg has one of the highest lift-served verticals in the world, at more than 6,000 feet difference from top to bottom. The general rule of thumb is about 4° F per 1,000 feet, and we saw about a 24°F difference between temperatures at the base versus the summit. This means nice, warm, green fields in town and snowy glaciers up top!

The second day of skiing at Mount Titlis was much more pleasant than the first. The sky was blue and we were ready to rock!

We loved seeing the views from the trails (the clouds made it difficult to enjoy the scenery the day before) and the snow was much better, so we were having a great time! 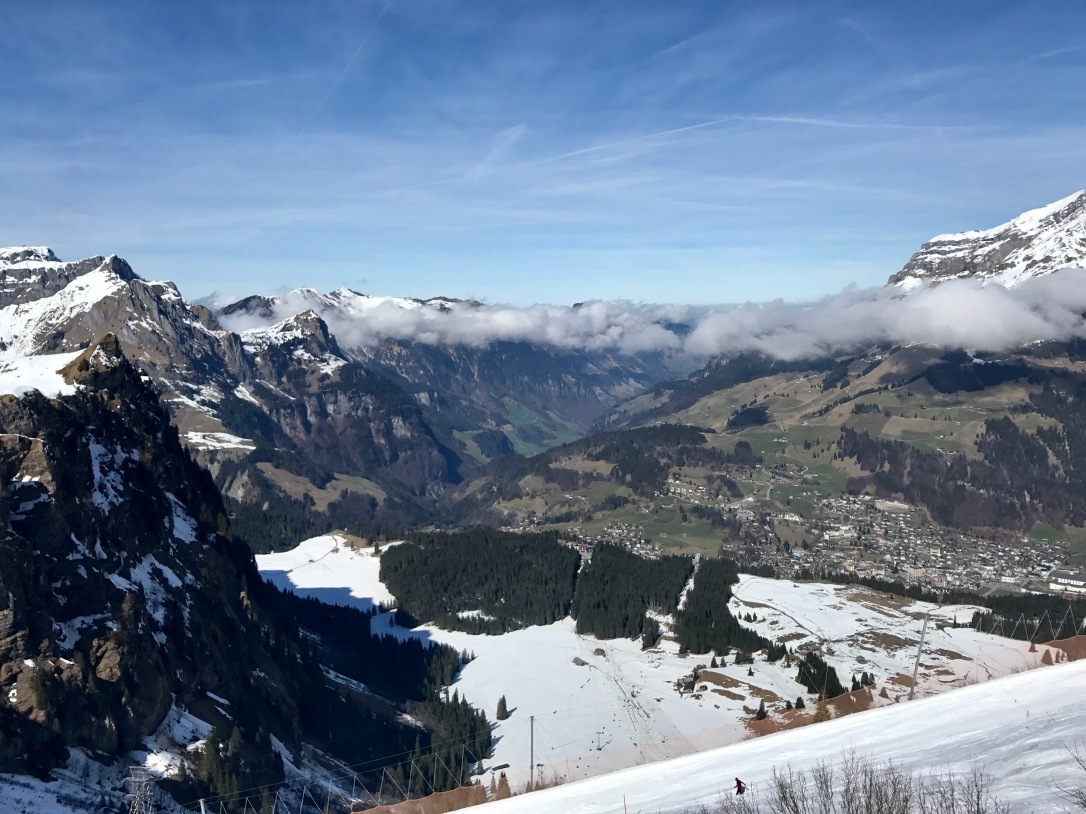 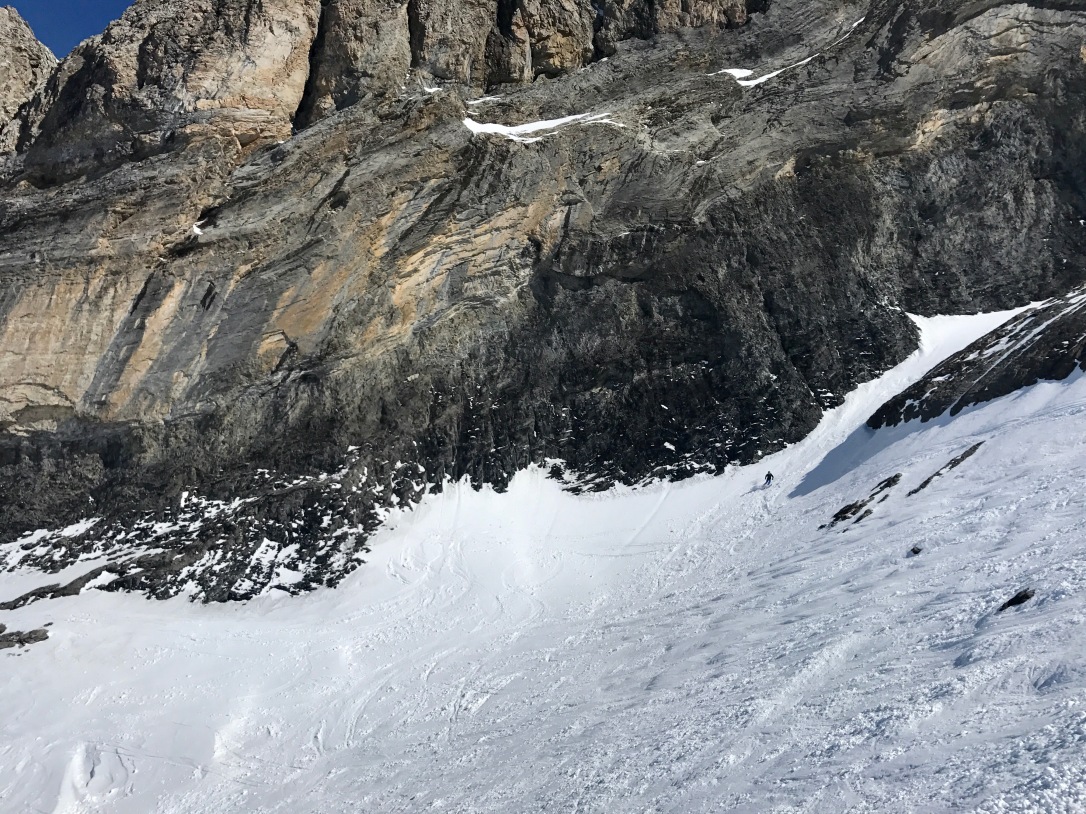 Partway through the morning, we decided to head to the top of the mountain to check out some different trails and the Mount Titlis Cliff Walk, Europe’s highest suspension bridge at around 10,000 feet above sea level… making it a huge tourist destination, we realized. There were large groups Asian tourists EVERYWHERE up there! It seemed that many of them had never seen snow before. Grown adults were playing with it, taking pictures of icicles, and staring in wonder as we skied by them. A few of them even asked to take photos with us, fascinated that we were skiing up there haha! 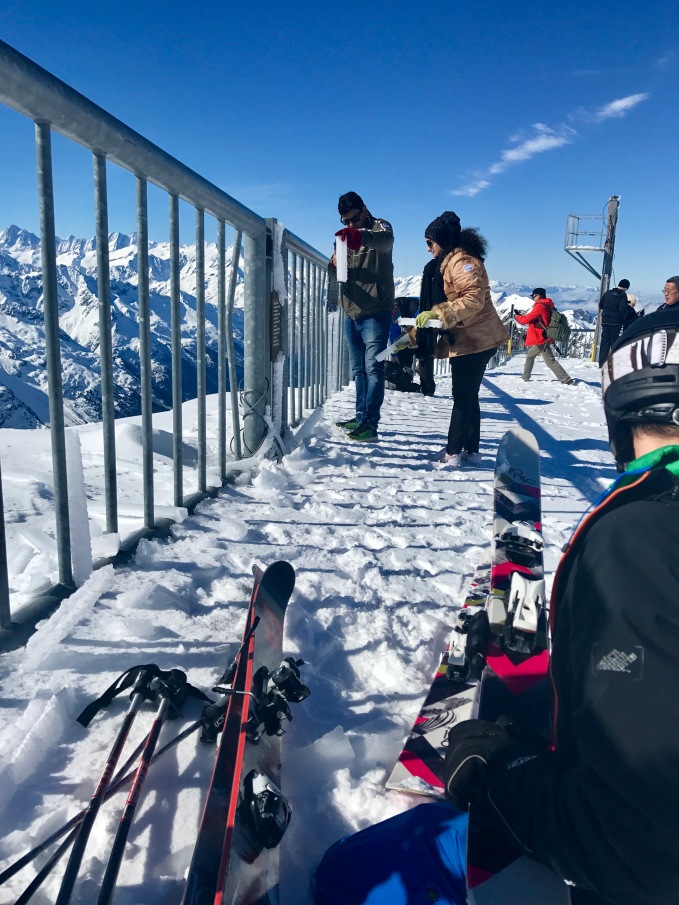 Chris and I felt like celebrities… 3 different Asian tourists asked to take pictures with them (and their families!) 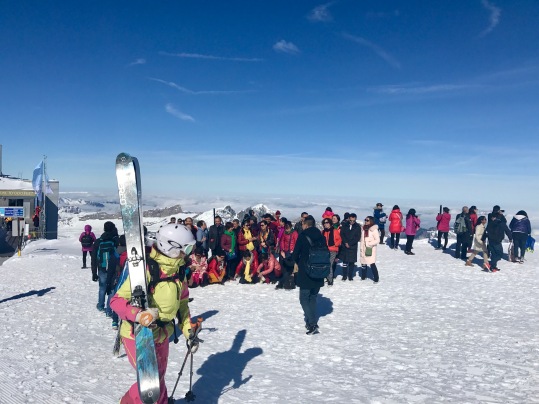 I offered to take this lady’s picture for her, then she asked me to get in the next one, so I made Chris get in with me! Haha!

While Engelberg has been a popular Asian tourist destination for the past few decades, it has also begun to become more popular among the “freeskier” crowd. The scale of the terrain and generally low skier traffic usually means that one can ski steep, untracked powder for days after a storm. Unfortunately for Chris and I, the weather and snow pack were not cooperating, so we had to stay on trail for more time than we usually do.

When we got sick of the crowds at the top, we headed back down toward the middle of the mountain. The après-ski scene was a lot more “happening” that day, since it was so much nicer out!

Toward the end of the ski day, we started making our way back down the trail to town, stopping frequently to capture the beauty of Engelberg and the surrounding mountains as we went. 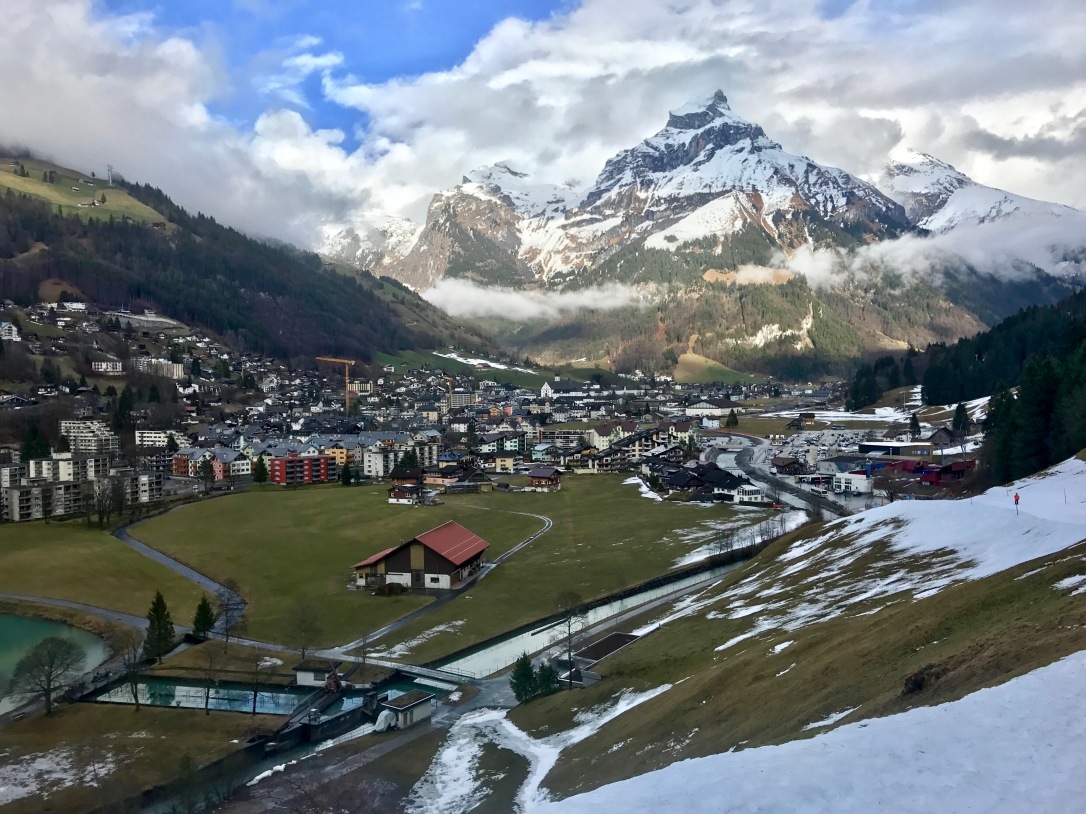 At the end of a nice ski day, we headed back to the AirBnB for a quick shower and change before throwing our bags in the rental car and hitting the road. We had had a great time in beautiful Engelberg, Switzerland, but it was time to go home! 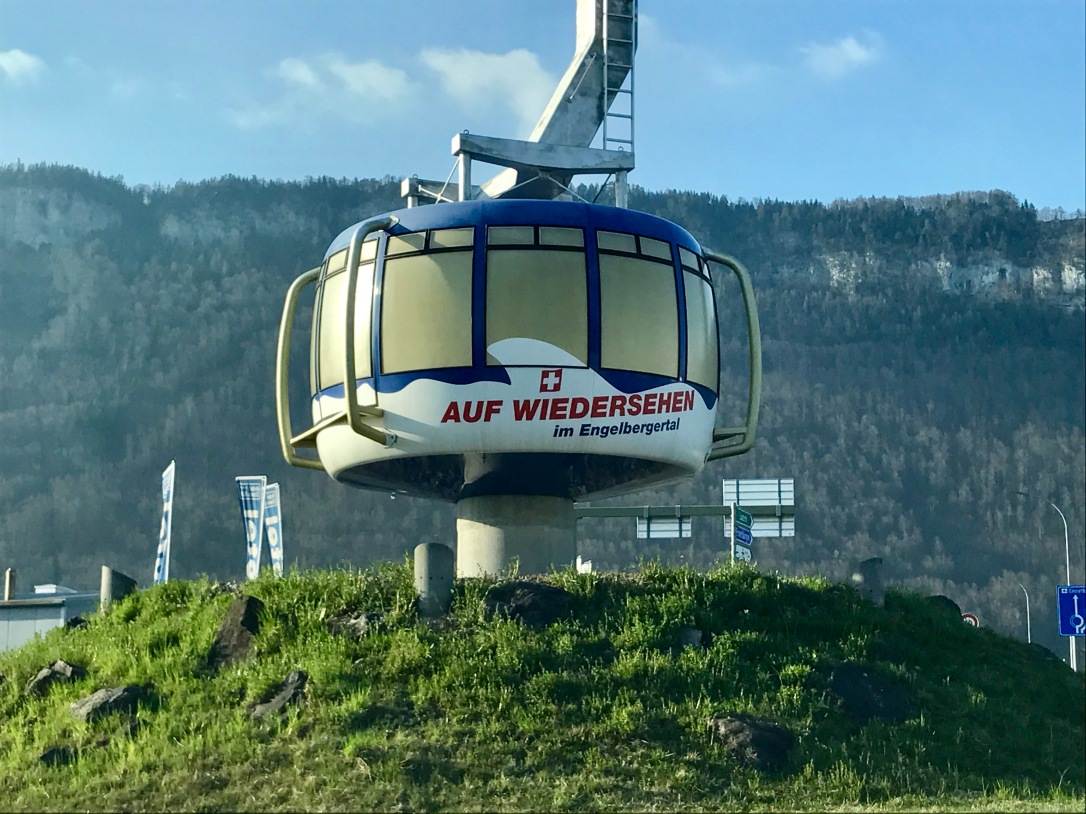