One of the very first day trips Chris and I took when we moved to London was to the small coastal town of Brighton, England. It’s a very popular place to be in the summer, so of course, we went in… October.

We woke up early and took the train from Victoria Station to Brighton. It was an easy 1 hour and 20 minute train ride south. When we got into town, we started to explore, quickly discovering that Brighton was a quirky and interesting little beach town.

First, we grabbed breakfast and a coffee at Marwood Coffeehouse & Bar, a funky (and a tad bit creepy) establishment, tucked into a side street. We couldn’t help but to stare at all the interesting decor. (On the way out, there wasn’t a door knob to twist, but rather a mannequin’s hand that you had to pull to let yourself out!)

Next, we made our way to the Royal Pavilion, the Royal Pavilion Gardens, and the Brighton Dome (a concert hall). We opted not to go into the pavilion or dome, but walked all around the properties instead, admiring the architecture of the Taj Mahal-style pavilion. Apparently, it was built as a private residence for King George IV and was later used as a hospital during World War I! 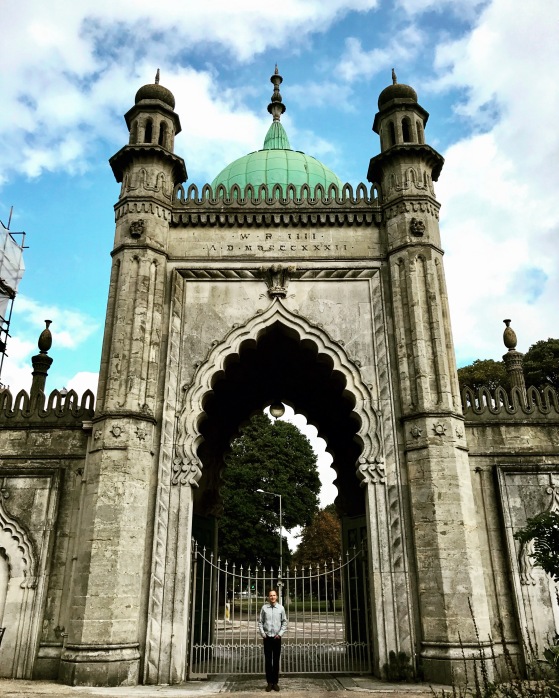 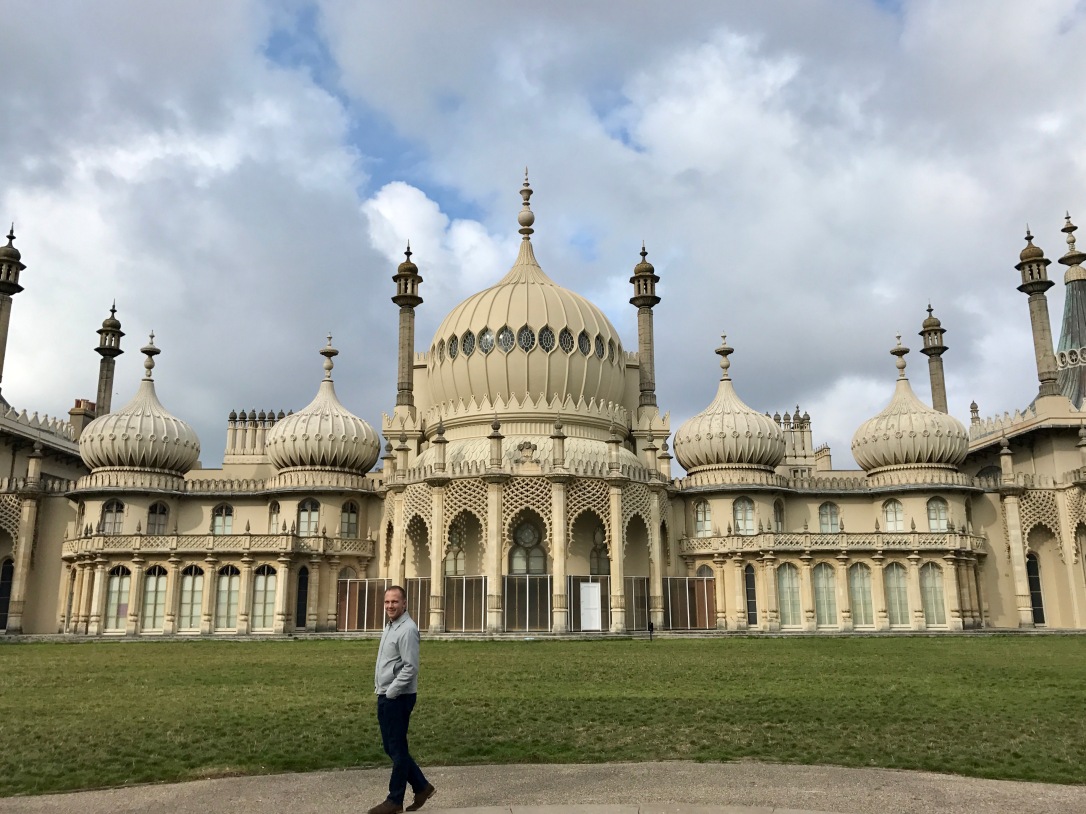 We continued on, heading toward the water to check out the famous Brighton Pier, which had an amusement park and lots of food stands selling carnival-style goodies, like “candy floss” (what they call cotton candy here!). It was pretty neat! Even in October, there were plenty of people out and about, enjoying the boardwalk festivities. (I can’t even imagine how crowded it must be in the middle of the summer!) 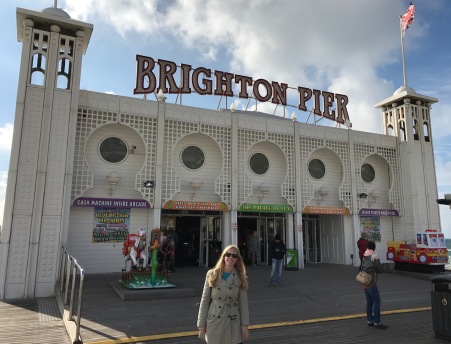 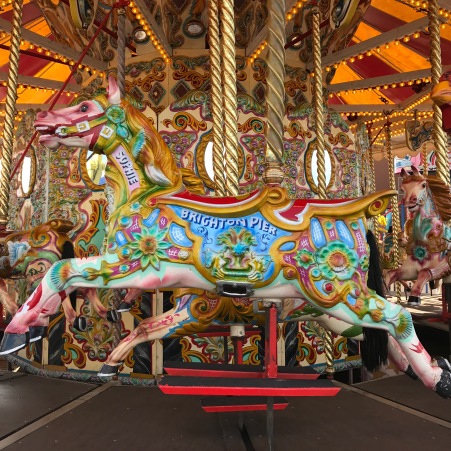 After we took a stroll down to the end of the pier and back, we walked along the rocky Brighton Beach, wishing we had some beach chairs and a little more sun. 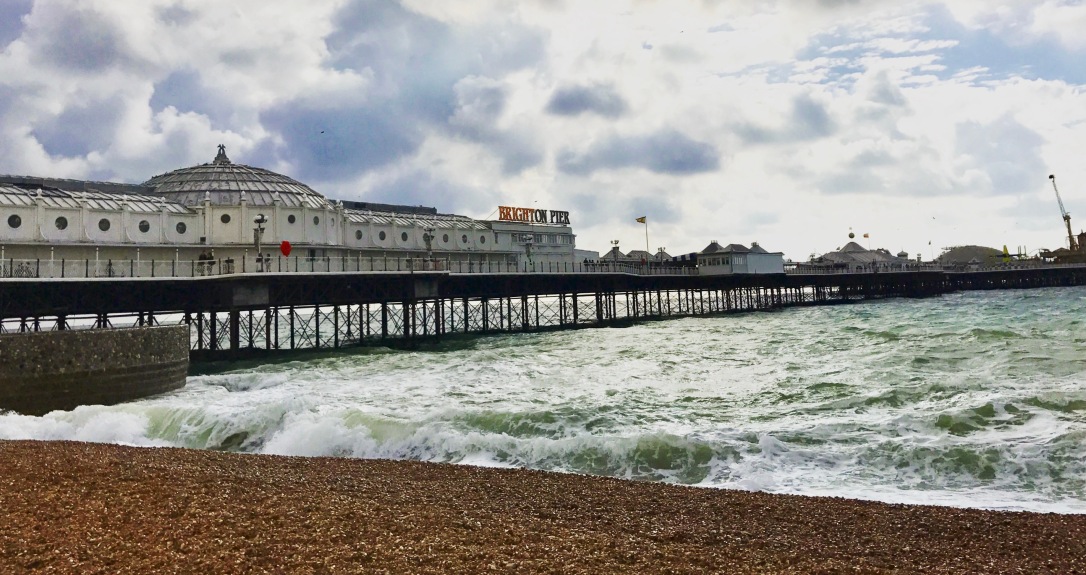 Later, we poked around the shops in the “lanes” (what they call the small, narrow alleys in this town), confirming our earlier beliefs that Brighton was an odd place, indeed, when we found these:

After about 10 minutes, Chris got sick of shopping (typical), so we headed to a restaurant called Indian Summer for some lunch. It was pretty tasty!

Finally, it was time to start heading toward the train station, but not before I managed to buy a blueberry meringue almost as big as my face for the ride home. It was delightfully sugary and sticky. We hopped back on the train and said, “Goodbye for now, Brighton!” It had been a great day trip from London! 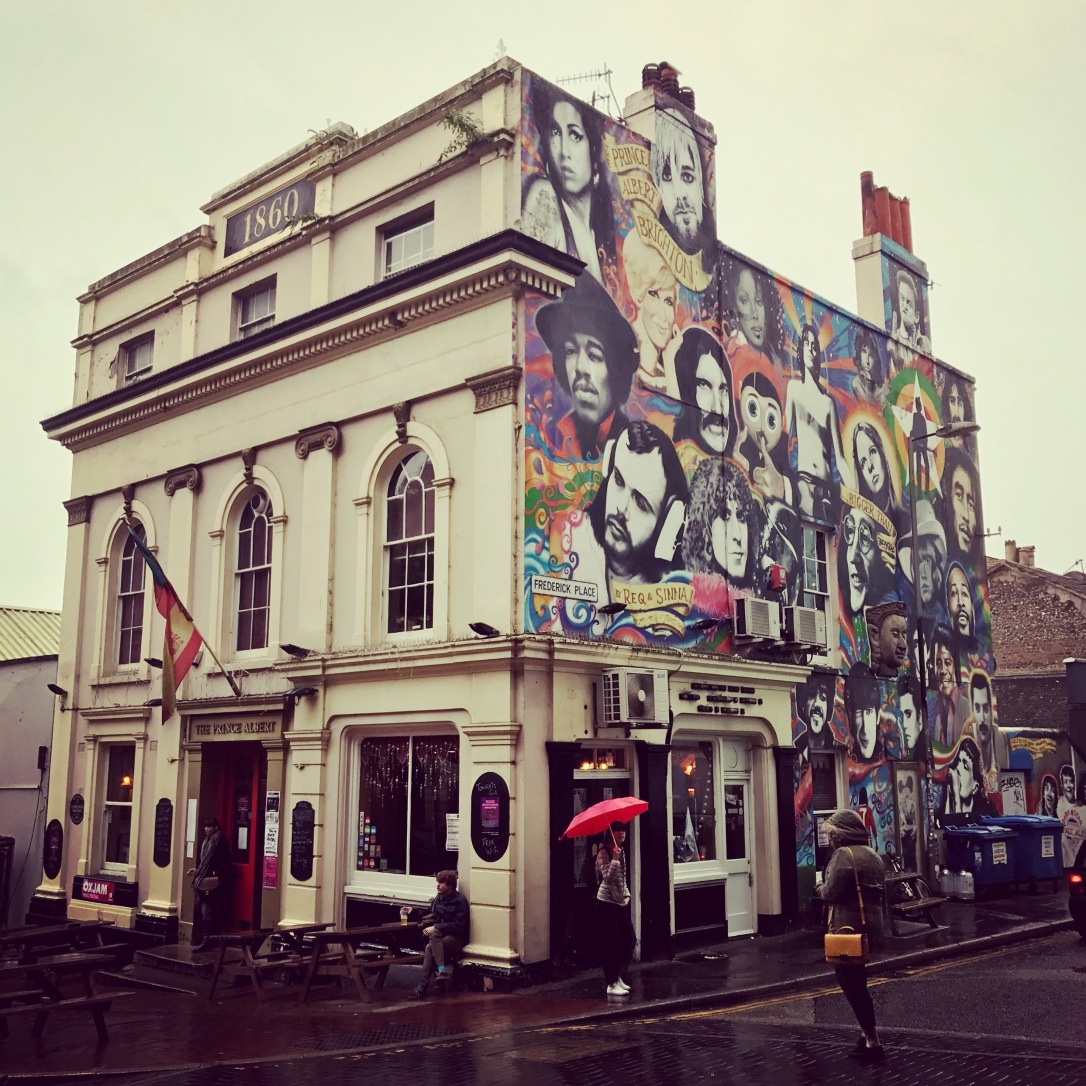 Loved checking out the Setas de Sevilla at sunset yesterday! (And Glenn loved the playground. 😊) 🇪🇸
Today, we took a day trip from Sevilla to Córdoba, another nearby city I visited while studying abroad in Spain during college. The Mezquita de Córdoba was just as beautiful and impressive as I remembered. ❤️
One of my favorite parts of exploring Sevilla today was soaking in the golden scenes at #PlazadeEspaña before sunset. The cherry on top was the incredibly talented and passionate flamenco performance. 💃🏼🇪🇸 ❤️
Reflecting on my travels in Spain while looking at this reflection in Spain. 🙃🇪🇸🌍
Back in 2009, I studied in Granada, Spain for a semester. During my time abroad, one of my fondest memories was of a group trip to Sevilla, Spain. Living in London now has made it possible to pop down to Spain a few more times and I’ve absolutely loved having the chance to share my love of Spain’s beautiful language, culture, architecture, and way of life with Chris and now with Glenn. 🇪🇸 🌍 #navigatingnewlyweds #littleexplorer
Fun morning at this cute little baby café with my little buddy! 😋🧸💚
Perfect day for a “pub walk”... Did a (muddy) 5 mile walk in the woods and made some friends along the way before getting Sunday lunch at a lovely pub.🦙#navigatingnewlyweds 🇬🇧
Trains and planes and automobiles. Traveling is fun when you’ve got these two by your side. (First photo taken in the family car of the train from Budapest to Vienna right after Christmas.) 🚂 ✈️ 🚘 💙
I loved seeing the beautiful #MatthiasChurch next to the #FishermansBastion. The tile roof was so ornate! #Budapest has some pretty impressive architecture! 🇭🇺
Even though it was a bit crowded and @chris911sc said, “it’s not actually that old,” #fishermansbastion was probably my favourite thing about #Budapest. I loved the design of this lookout and the beautiful views of the city that it provided. Thanks for showing us this gem, @inshredible! 🇭🇺
2019 was a pretty amazing year. Chris and I got to know and love our little buddy more and more every day and Glenn got to visit his first 9 countries! Let the fun and adventures continue in 2020... From our family to yours, Happy New Year! 🥳🌍❤️#navigatingnewlyweds
🇭🇺
I’d say our day out in Vienna was a great success! Christmas markets, mulled wine, and very good friends. Cheers and Merry Christmas from the Conwick Boboroys! 😘🎄🇦🇹
When we were walking around #Funchal the other day, we discovered these beautiful #painteddoors. Each one was so different and creative. They lined a cobbled street filled with restaurants with outdoor seating, each one enticing us to sit down, sip some Portuguese wine, and enjoy a quiet moment in that lovely place. #navigatingnewlyweds 🚪🎨🍷🇵🇹
This Thanksgiving, I’m thankful for amazing adventures with my two best boys. ❤️
%d bloggers like this: