In the first few weeks of living in the U.K., Chris and I made the most of our weekends by taking some day trips outside of the city. London has a great transport system, and you can get to lots of really cool towns and cities by hopping on a train or bus. One of these day trips was to Oxford, England, best known for being the home of the prestigious University of Oxford (but also well-known for being a Harry Potter filming location!).

We woke up early that chilly October morning and hopped on the “Oxford Tube.” It was an easy bus ride, just over an hour from London. When we arrived, we grabbed a quick coffee and pastry at Caffè Nero before going to a meeting spot where we were hoping to catch a free walking tour we had read about.

…Unluckily for us, we had chosen to visit Oxford on a day when there was a half marathon going on… And the start of the race was at the same location as the meeting point for the tour group, so there were people standing around everywhere. It was so hard to tell who was there to cheer on runners and who was there to get their free Oxford tour on!!

Eventually, we found some tour guides, who quickly explained that there was an English-speaking tour and a Spanish-speaking tour being offered that morning. After a few seconds of deliberation, I decided to ditch my husband to join the Spanish group. I thought it would be the perfect chance to practice my Spanish! (Don’t worry, the hubby didn’t mind.)

Chris wandered off with the English group and I joined mine: mostly Spaniards with dark hair, so I stuck out like a sore-thumbed gringa. We started off on our walking tour and I did my best to keep up (linguistically speaking) with my tour guide’s explanations of what was all around us.

One of the most interesting stories my guide told my group was about a bar fight that occurred (I think in the 1300s??) between two Oxford students and a barman that lasted 2 days and resulted in the deaths of over 90 people (although other sources cite different numbers). It started because one of the students complained that his wine had been watered down (and the barman had obviously disagreed). The pub was called Swindlestock Tavern at the time, but today, the site is home to a Santander bank. The Spanish tour guide joked with the other Spaniards that he’d never go to a Santander bank because in English, swindle (as in Swindlestock Tavern) means to steal (i.e. Santander will steal your money)… all the Spanish speakers laughed. (I may be a gringa, but I got the Spanish joke! #win)

We continued on our tour, walking along the side of Christ Church, one of the 38 colleges that make up Oxford University. It was a truly beautiful building. Apparently, Lewis Carroll, the author of Alice’s Adventures in Wonderland, attended college here for mathematics and got the inspiration for his Alice stories from this campus. (Some Harry Potter scenes have been filmed here, as well!) 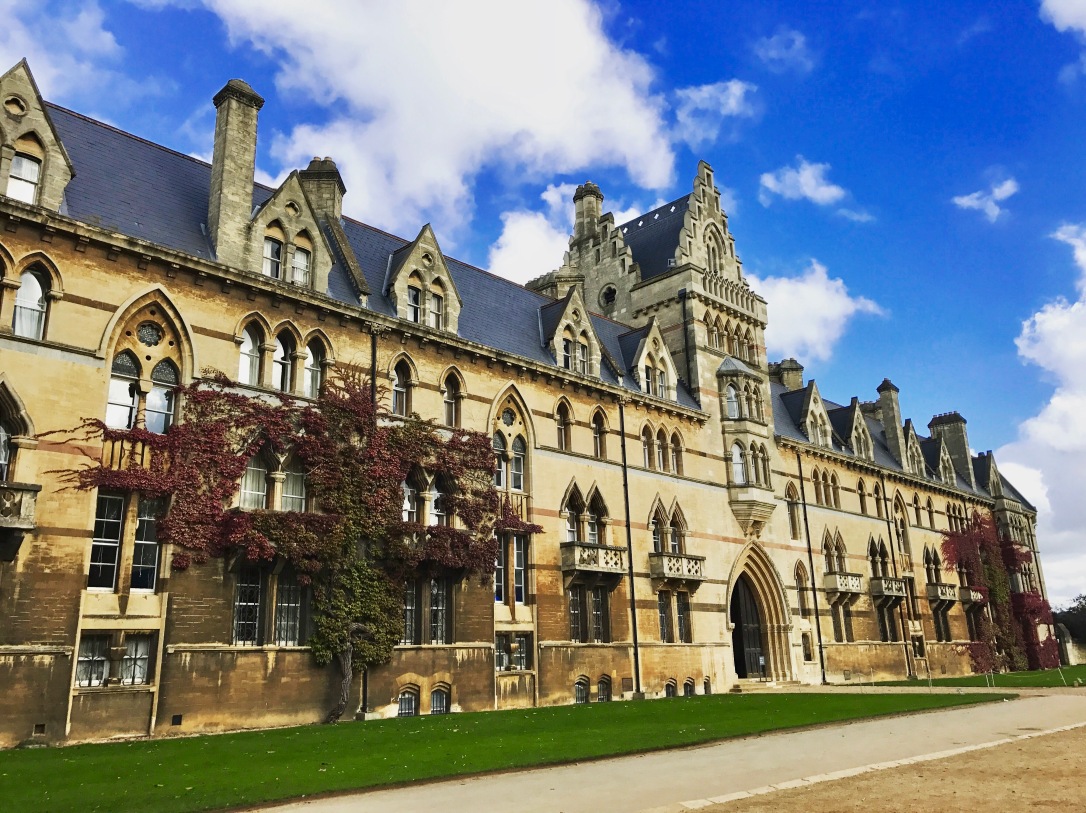 We saw some other parts of Oxford University’s campus, too… Some definitely reminded me of Harry Potter! 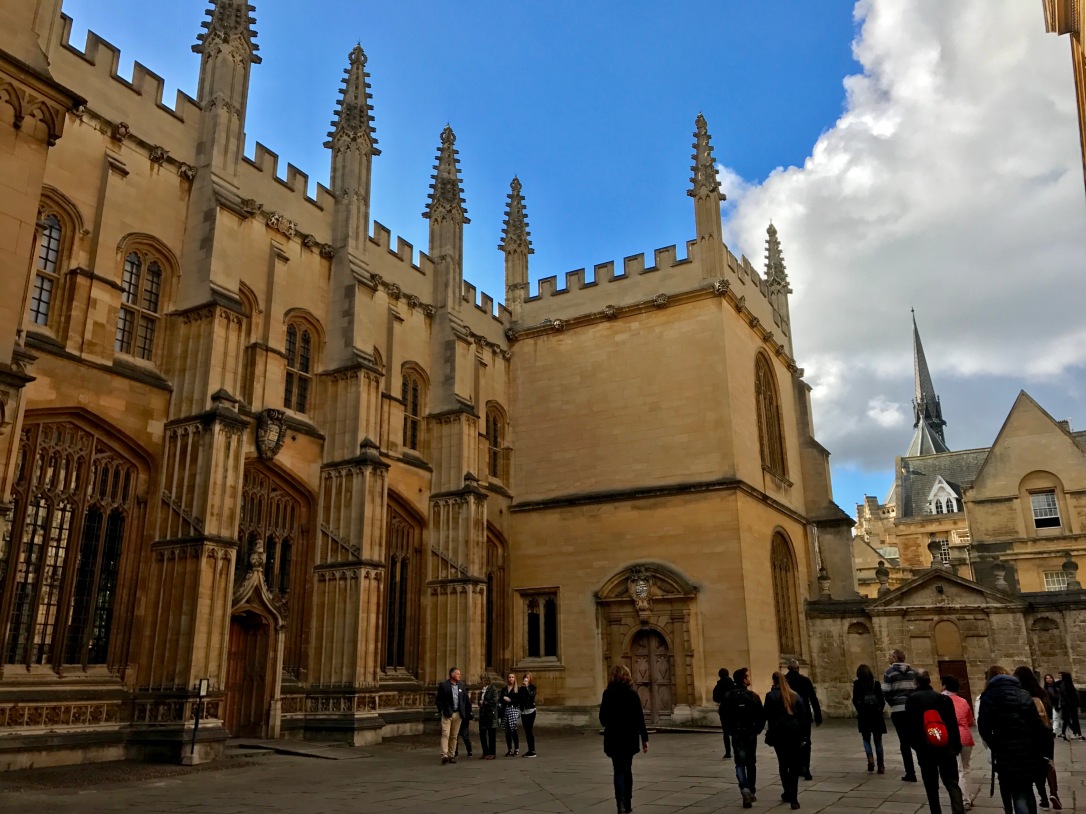 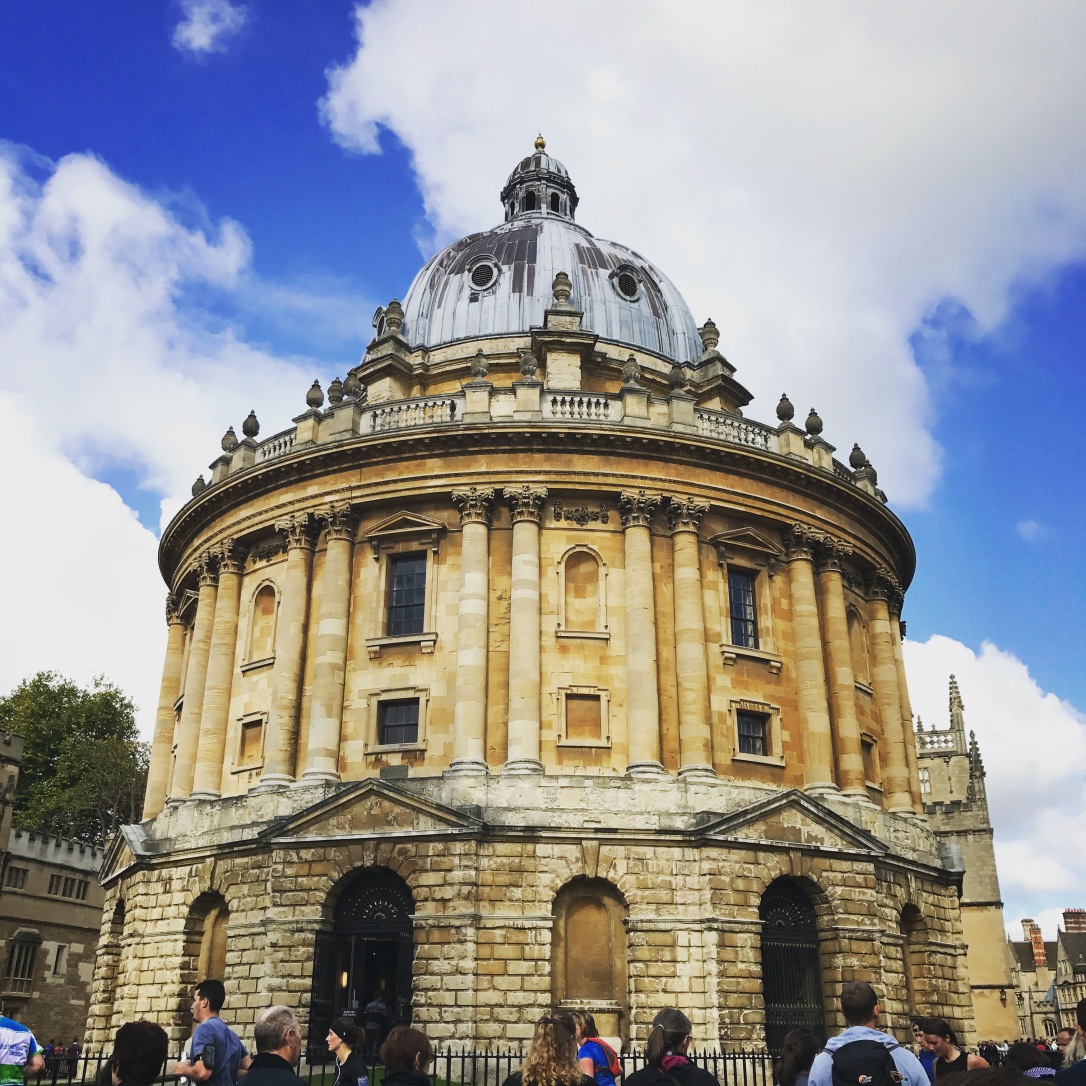 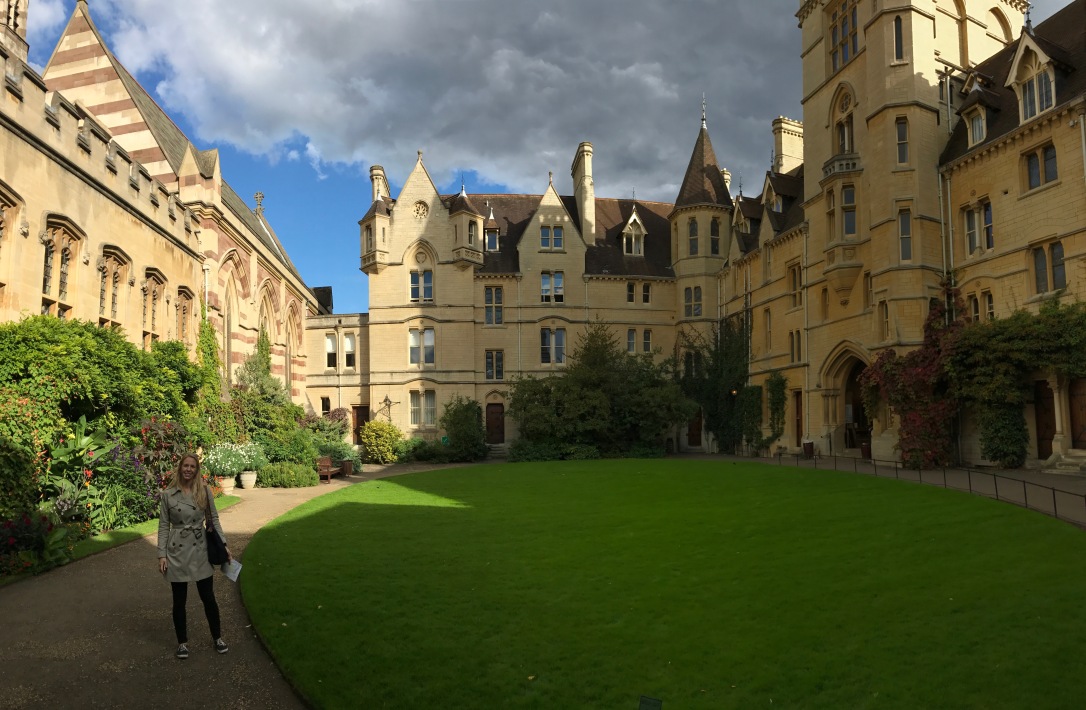 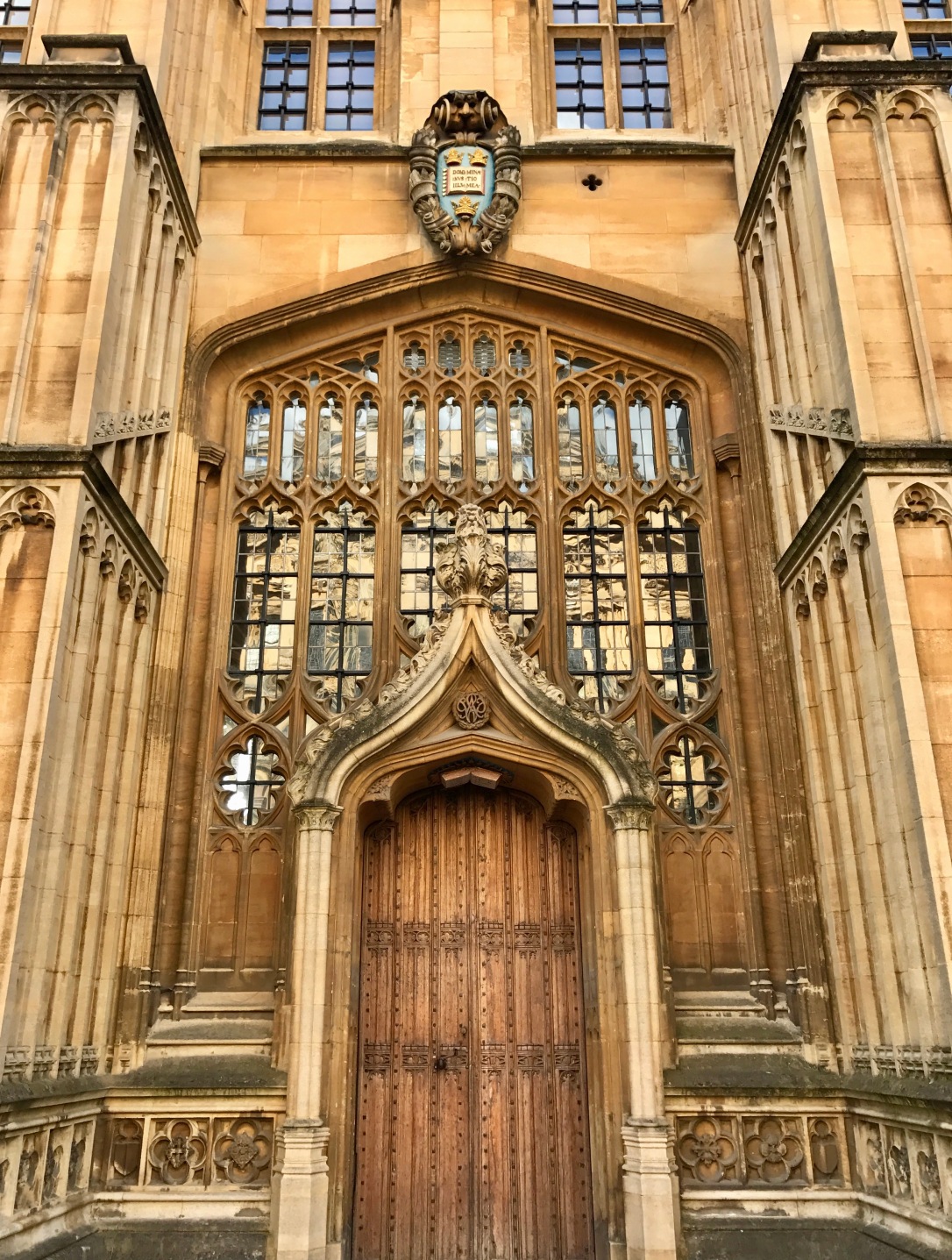 When the tour ended, I said my adioses and went to find Chris again. We grabbed lunch at a cool British pub outside of the center of town. (The half marathon was still going on and the center was way too crowded for us.) When we were done, we went to Blackwell’s Bookshop – or as I called it – HEAVEN!! Apparently the store contains 3 miles worth of bookshelves! I got a couple books for myself, a postcard, and a train book for my nephew.

With a bit of time to kill before catching our bus back home, we stopped at Turf Tavern, a cool little pub hidden in a back alley. Apparently it’s a pretty popular spot! We heard that the cast and crew of Harry Potter would come here to kick back after filming in Oxford and that Bill Clinton came here during “uni,” but “did not inhale” haha… 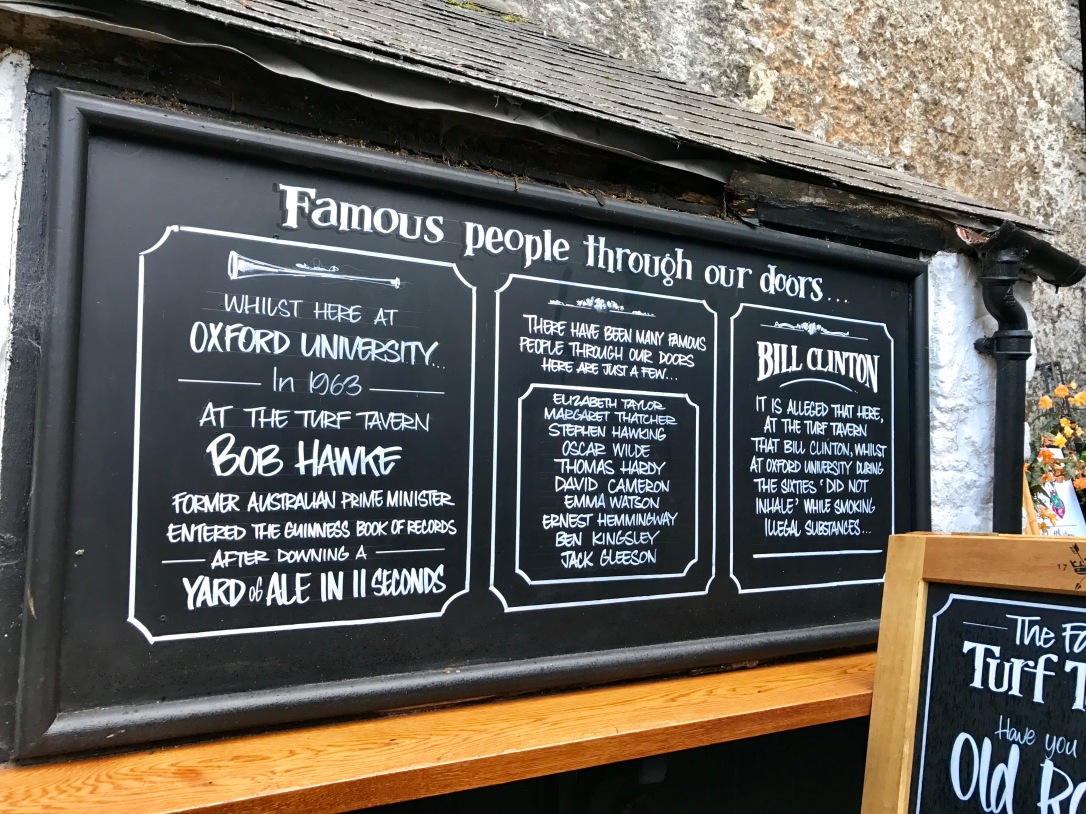 At the end of a long day of exploring and walking, we finally hopped back on the “Oxford Tube” and headed back to London.

Until we meet again, Oxford!