Over the weekend, Chris and I headed down to southeast England for a road trip through Kent. We had planned out a little itinerary, and were eager to see some castles and the seaside. We woke up early on Saturday morning and hit the road, heading towards Leeds Castle first.

The castle didn’t open until 10, and we were there too early anyway, so we decided to skip going inside and opted to instead walk around the grounds via “public footpaths,” admiring the moat and surrounding landscape. 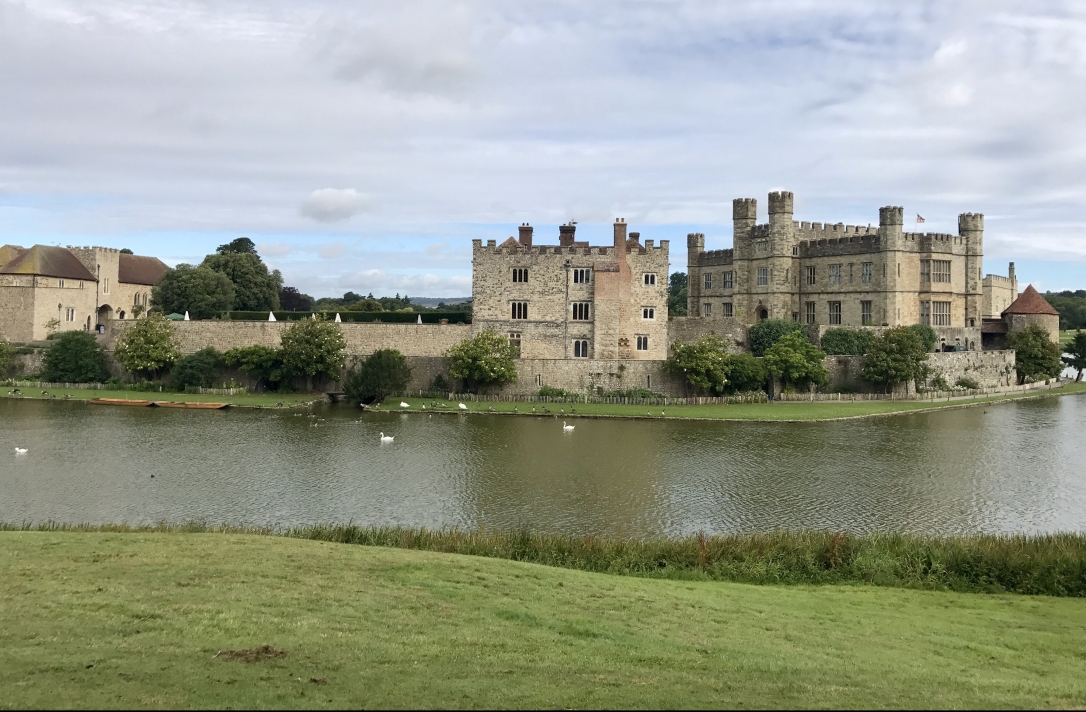 After a lovely walk around Leeds Castle, we headed to the city of Canterbury. (Ever heard of the Canterbury Tales??) We went on a river tour of the city’s canal with Canterbury River Tours. It was great! Our guide/captain, Henry, was very informative and funny. 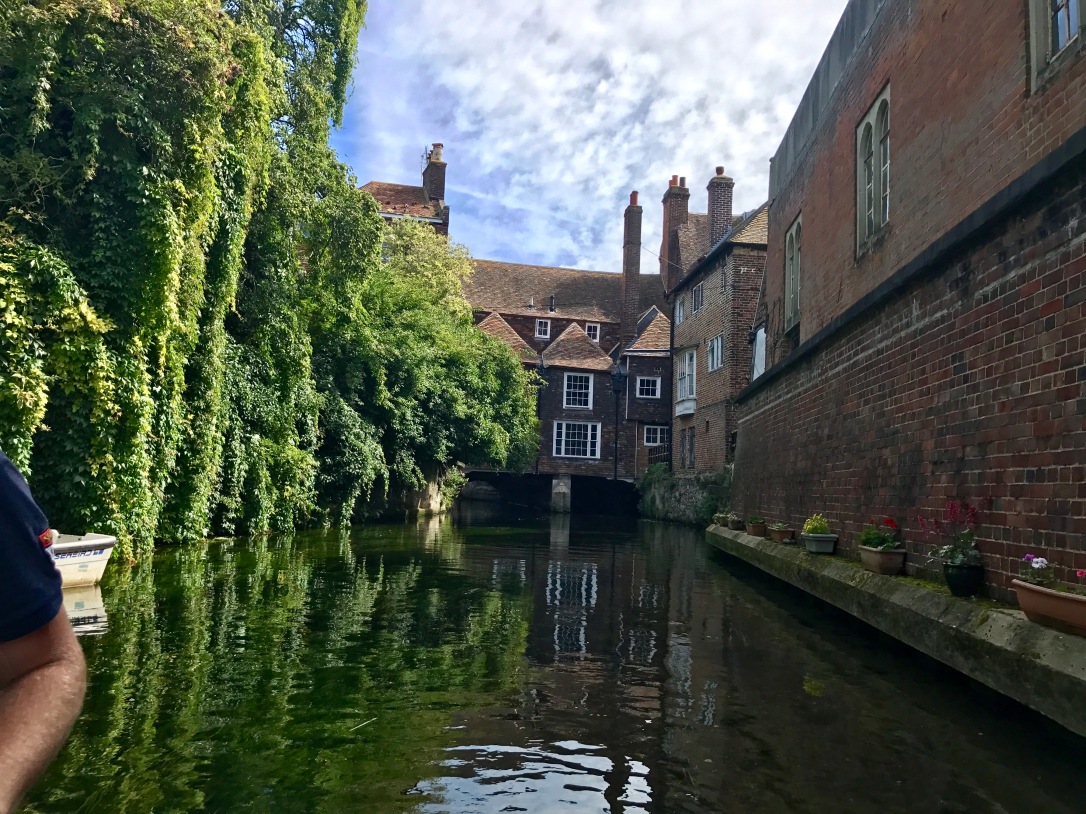 After the boat tour, we walked around the city a little more. We were hoping to check out the impressive Canterbury Cathedral, but being the middle of the summer here in England, there was a huge line and we didn’t have enough time to wait. (Our parking meter was about to run out!)

Leaving Canterbury behind us, we continued on to Dover, getting frustrated when we got into town by about 20 minutes of bumper-to-bumper traffic. We quickly realized it was from all the cars in front of us waiting in the customs line so they could get on the ferry to go over to France! Dover is the closest point in the U.K. to Europe… it’s just 30 miles across the English Channel to Calais, France! It’s so close that I got a “Welcome to France!” text from my phone company!

Eventually we got to Dover Castle and parked in the field. I brought a book with me, planning to read in the tea shop while Chris went off and explored the castle without me. (I had already visited back in February with my friend, Kim!) He checked out the Great Tower, the medieval tunnels, and the wartime tunnels.

If you’ve heard about the movie Dunkirk, this is the Dover they’re talking about. “Early in the Second World War, in late May 1940, the Allied forces of British, French and Belgian troops were trapped by the invading German army on the coast of France and Belgium, in the area around Dunkirk. The desperate and near-miraculous rescue that followed – controlled from Dover Castle – saved the Allied cause in Europe from total collapse, and was the biggest evacuation in military history.” It was called Operation Dynamo and it’s a fascinating piece of WWII history.

When Chris was finished exploring the castle and the war tunnels, we drove down the road to check out the famous White Cliffs of Dover. Luckily, we were getting there at the end of the day, so we got in for free! Unluckily, the rain picked up as soon as we left the shelter of our little blue car and we got ab.so.lute.ly SOAKED. (The views were pretty cool though!)

Drenched after our quick look at the cliffs, we got back in the car and blasted the heat to attempt to dry ourselves off before dinner.

We went to a lovely little Italian restaurant called La Scala for dinner that night. My friend Christine had recommended it, and it did not disappoint! The pasta and wine were absolutely delicious!

Our bellies full, we headed to our AirBnB for the night.

In the morning, we had a quick breakfast at our AirBnB, then drove through the lovely little town of Kingsdown on our way to the Walmer Castle and Gardens. We got into the castle for free with our English Heritage memberships (which also got Chris into Dover Castle for free!), and enjoyed a quick little tour around the castle before exploring the gardens. It was nice, but we didn’t stay long (that’s the great part about having a membership!). 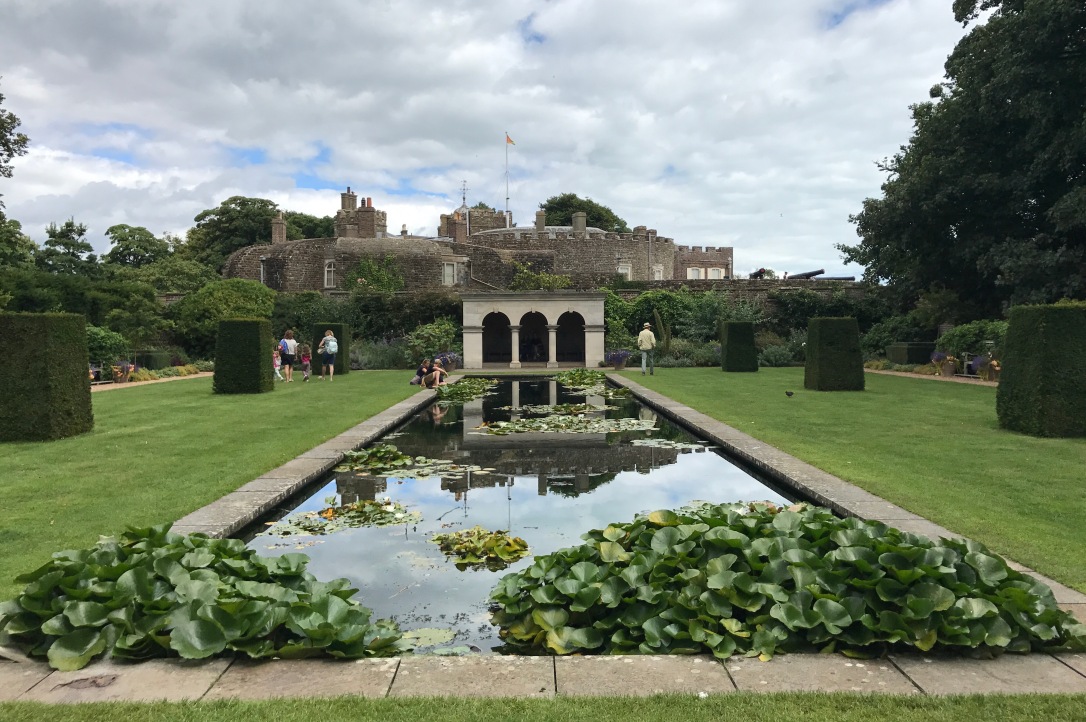 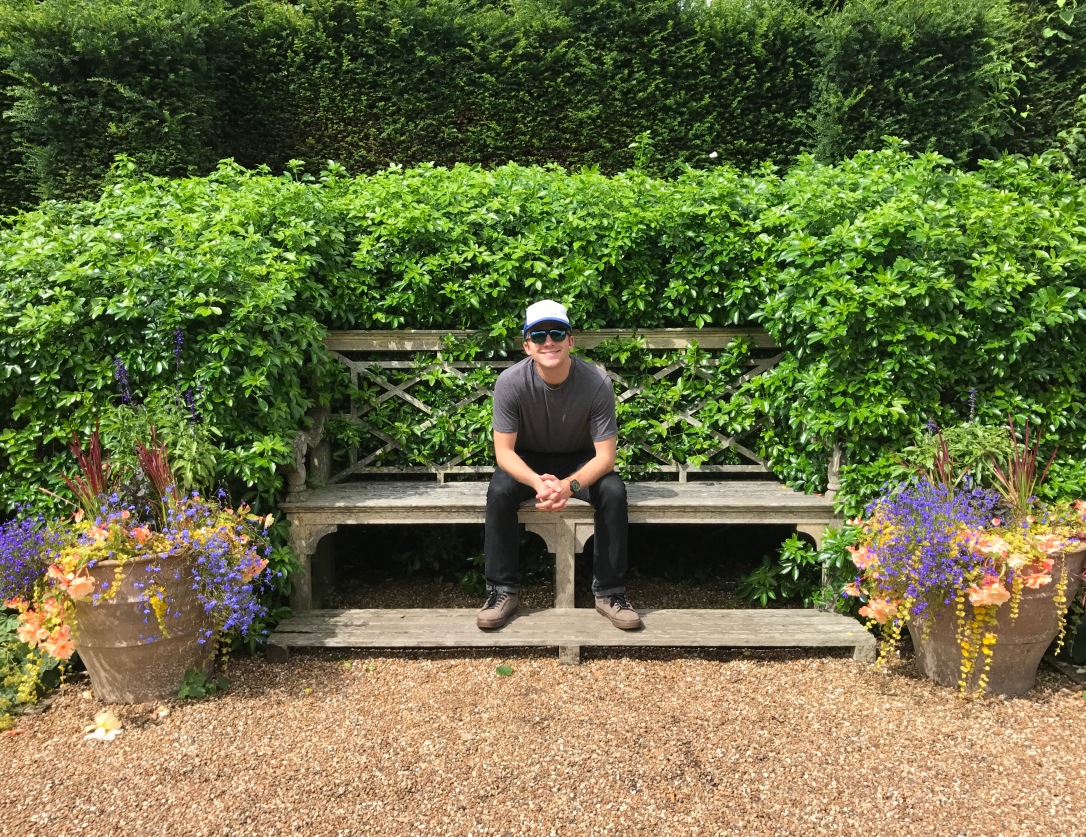 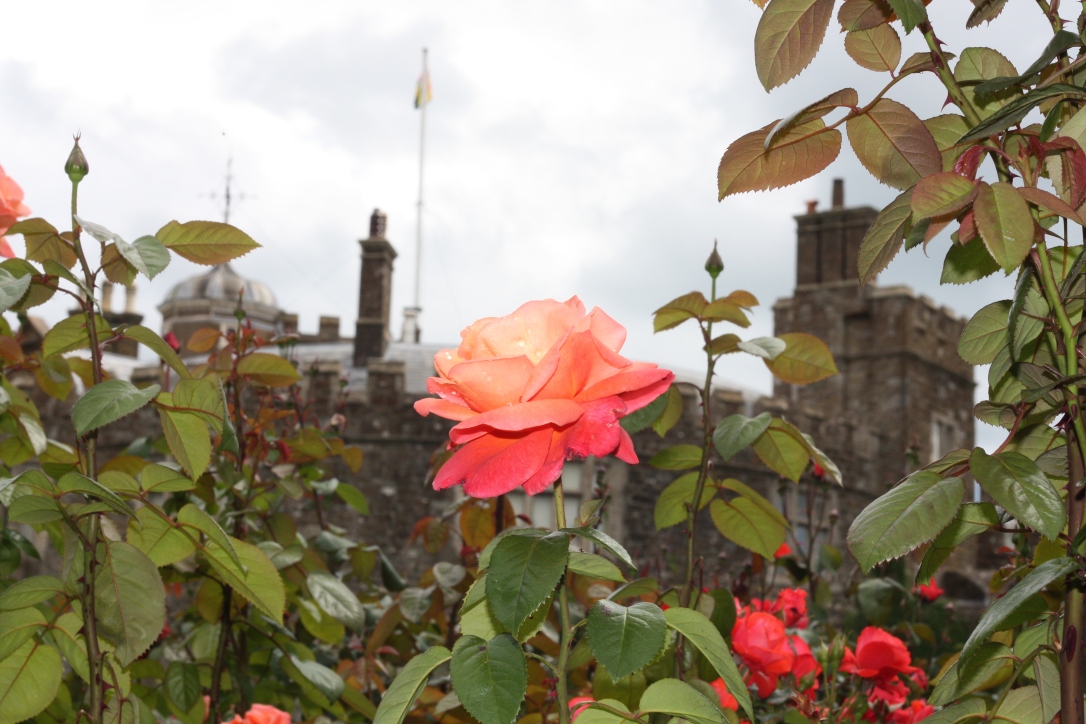 Next, we drove through the nearby port of Deal and grabbed a coffee in front of Deal Castle (a pretty puny “castle”, if you ask me…). We sat on a park bench, sipping our coffees, and looking out at the water…

…before continuing on to a historic little town called Sandwich, where we shared a…

….piece of chocolate cake. Obviously. (Why, what did you think I was going to say?) 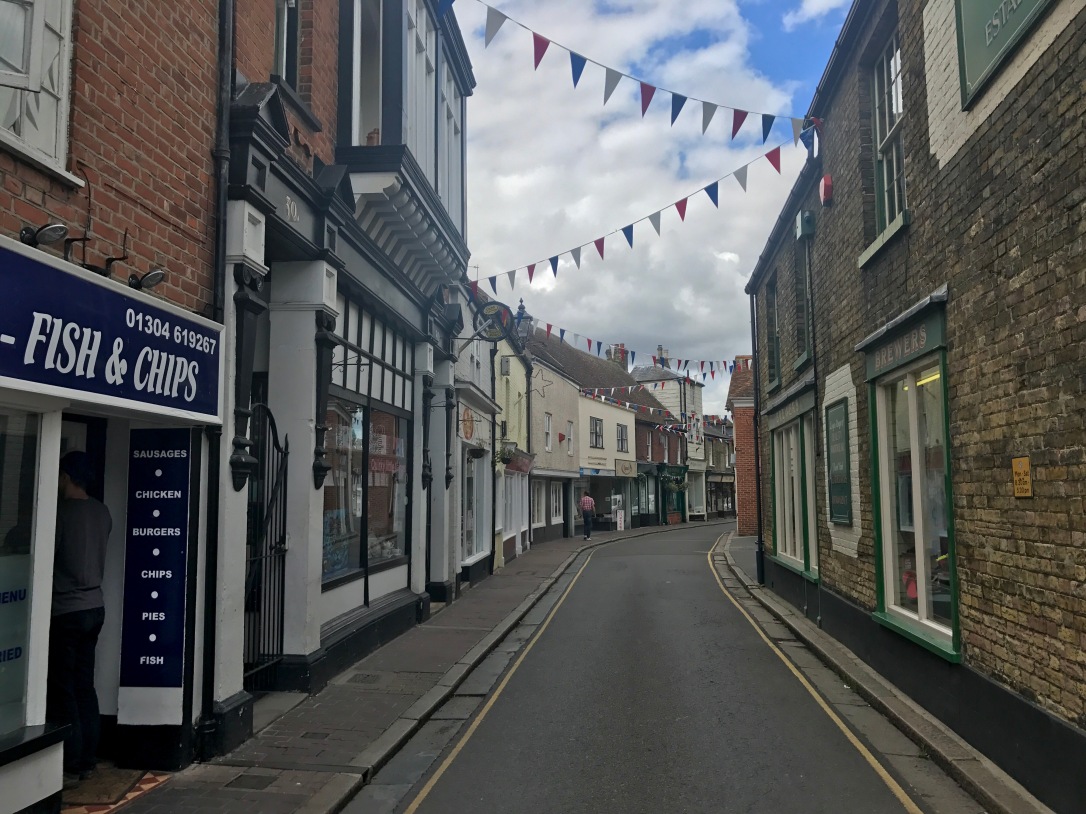 Next, we continued on to the beach town of Broadstairs in Viking Bay. We walked around the town for a bit and checked out the beach scene.

We continued on, eventually stopping for a late Sunday Roast lunch at Captain Digby’s Tavern, an establishment resting on top of the white chalky cliffs. Yeah, we were hungry, but really, we just went there for the view!

Our view from lunch: a castle on a hill, beautiful chalk cliffs, and the North Sea. 🙂

After feeding our leftover “crackling” to some big friendly dogs at the table next to us, we decided to take a little walk on the beach at Botany Bay. It was a very different beach experience than I was used to, for a few reasons. 1. I had never seen chalk cliffs before. 2. I had never been to a beach in July and been cold enough to be fully dressed – I’m usually sweating in a bathing suit! (Thanks, England)… 3. I had never heard so many different languages on a beach before! What an international scene!

Finally it was time for our last stop: Whitstable. I had been to this cute little seaside town back in February, but it certainly had a different vibe in July! We stopped at a little oyster shack on the beach, called The Forge, where we ordered a couple of oysters and a “donut souffle.” We were not disappointed. The homemade coconut ice cream sandwiched between two warm, homemade sugar donuts WAS INCREDIBLE.

After a full weekend exploring all Kent had to offer, it was time to head back to London!